Savvy Cellar has reopened with new owners who want to breathe fresh life into the decade-old wine bar housed in a former train station in downtown Mountain View.

Jim Yang, Dave Koehler and Rick Menard took over the 750 W. Evelyn Ave. business in January after former owner Holly Orchard moved out of the area, Yang said. Orchard, who had been a Savvy Cellar employee since the wine bar first opened in Redwood City years ago, acquired it from the original owner, Jennifer Ayre, in 2015. 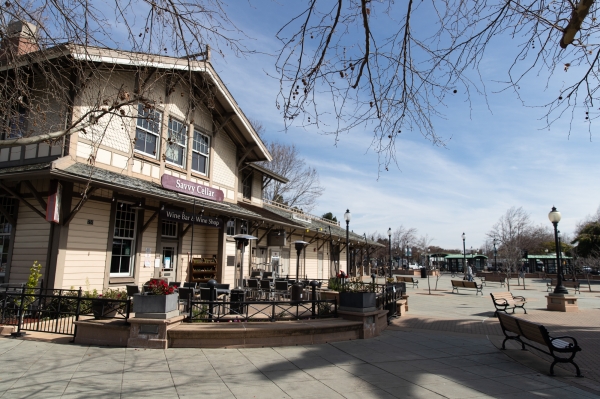 Yang is the co-founder and CEO of Beluga, an app for ordering, reservations, payment and restaurant recommendations. Koehler, Yang's longtime friend, is a certified public accountant who also co-owns San Jose wine bar Wine Affairs. They teamed up with Menard, who's worked in the restaurant industry for 20 years.

The new owners don't want to "fix what's not broken," at the longtime wine bar, Yang said, where they've inherited a customer base of loyal wine enthusiasts. But they're making some tweaks: adding craft beer on tap and in cans, expanding the food menu and, given Yang's tech background, accepting cryptocurrency as a payment and upgrading the WiFi bandwidth. They'll use Beluga for contactless ordering.

When public health restrictions loosen, they plan to host wine and beer tastings, trivia nights and other events. They also want to take advantage of Savvy Cellar's unique location on the edge of Caltrain and the Mountain View VTA light rail station, where during pre-pandemic times scores of commuters are passing through on their way to work or home, to Giant's games at Oracle Park in San Francisco or concerts at Shoreline Amphitheater in Mountain View. Yang wants to use Beluga to give train riders a convenient way to preorder wine and quickly pick it up on their way through Mountain View (open alcoholic containers are allowed on Caltrain until 9 p.m.).

Much of this is predicated on life returning to normal, Yang acknowledged.

"Some people question why we'd take over a wine bar in the depth of a pandemic," he said. "At the risk of sounding corny, our society has a lot of issues right now but we feel like one of the small things we can do is bring people together in a very friendly, joyous, festive environment."

With Santa Clara County entering the red tier as of Wednesday, Savvy Cellar will be able to open inside at 25% capacity starting this Friday. People can also sit on an outdoor patio and order from an international selection of wines, beer and cider as well as food (under current public health regulations, alcohol must be served with food). Customers are required to keep their masks on unless they're actively eating or drinking. People can also purchase bottles and food to go.

The new owners have significantly expanded the beer offerings at Savvy Cellar, with six draft beers and almost 20 cans and bottles from local breweries including Strike Brewing Co. in San Jose and Modern Times Beer in Oakland.

The food menu is snack-focused -- Yang said they don't want to compete with Castro Street's many full-service restaurants -- including charcuterie and cheese plates, tater tots, crostini and flatbreads baked to order.

Savvy Cellar is open Tuesday-Friday from 4-9 p.m., Saturday 2:30-9 p.m. and Sunday noon to 7 p.m. On Sundays, the wine bar is offering brunch drinks like mimosas and Bellinis. Savvy Cellar accepts both reservations and walk-ins.