UPDATE: The Los Altos Farmers' Market resumed on Thursday, June 25. The Los Altos Village Association did not respond to an inquiry about whether CFMA is continuing as the market operator.

The Los Altos Farmers' Market was temporarily suspended this week amid calls to boycott the market's operator, the California Farmers' Market Association, for controversial comments its director made to a vendor distributing rainbow LGBTQ pride flags. 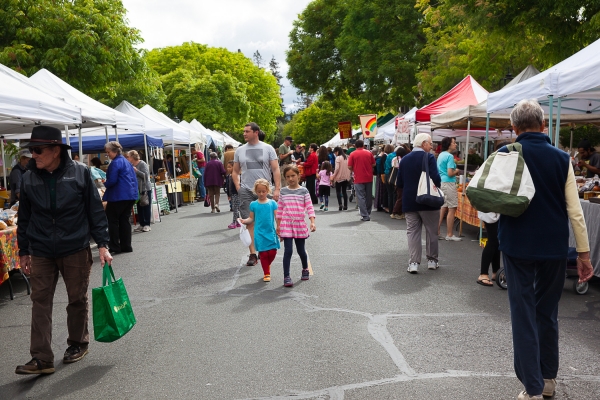 The Los Altos Farmers' Market has been temporarily suspended while the Los Altos Village Association investigates controversial comments made by the market operator. Photo taken May 5, 2016 by Michelle Le.

The video of the incident quickly went viral, and the California Farmers' Market Association (CFMA) stepped down as manager of the Livermore Farmers' Market.

"They were concerned that it was an offensive reaction from CFMA and felt that it really had no place here in Los Altos," he said, "but since they are a longtime provider we wanted to be able to for the first week put things on hold while we investigated and heard from them and determined were going to do in the future."

The California Farmers' Market Association has managed the Los Altos market for at least a decade, Hunter said. The seasonal market takes place on 2nd Street on Thursdays from 4-8 p.m.

Hayden told the Pleasanton Weekly that she was enforcing "standing policy."

"We don't have any problem with gay pride, but we have a problem with flags and it was blown out of proportion and it's very sad now because people are boycotting something that doesn't need to be boycotted," she said.

In the video, she tells the vendor, Dan Floyd of Dan Good Cookies, "My job is to run the market, not to satisfy your political point of view."

In a statement posted to the CFMA website, Hayden apologized and said she "regrets the unfortunate incident that took place at the Livermore Downtown Farmers Market."

"While we were focused on enforcing the market's rules, we neglected to see the bigger picture Dan was expressing with his Pride flags. The LGBTQ+ community deserves a tolerant environment to express and celebrate their identity. We should not have allowed the escalation of the conversation to take place and we apologize for the inaccurate implications that were made. CFMA recognizes that the Pride flag and the LGBTQ+ community that what it represents is not a political ideology," she said.

Los Altos Village Association board members are still waiting to talk with CFMA, Hunter said. He hopes the board will make a decision about the partnership before next Thursday's market. They are considering all options, including continuing with the California Farmers' Market Association.

"We certainly don't condone discrimination in any form," Hunter said. "Our board was upset by what they saw but want to make sure that we take everything into account."

It's unclear whether Los Altos Farmers' Market vendors were notified about the market cancelation. At least one, Little Sky Bakery, sent an email to customers late Thursday afternoon saying the Los Altos market was canceled but she wasn't sure why.

Hunter said it would have been CFMA's responsibility to notify vendors as the organization is "the complete turnkey provider for the event."