Sakaguchi is related to Kazuo Yamagishi, who is believed to have created the tsukemen style of ramen, chilled noodles dipped in a separate bowl of broth. He is also the grandson of Masayasu Sakaguchi, who in 1951 co-founded Taishoken, a string of renowned ramen shops in Japan.

Sakaguchi will bring his family's rich legacy to life with the opening of the first U.S. location of Taishoken in San Mateo. The restaurant will be located at 47 E. 4th Ave., formerly Kisaku Japanese Restaurant. 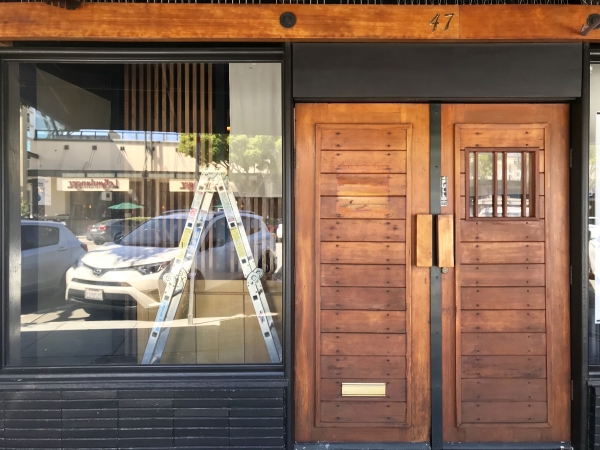 The exterior of Taishoken in San Mateo, set to open in late June. Photo by Elena Kadvany.

In an interview, Sakaguchi said through a translator that he started working at an Italian restaurant in Tokyo after a post-college backpacking trip that took him abroad. He then cooked at Mensho Tokyo for three years in Japan, then three years at the popular ramen company's San Francisco location. He said he came to the United States to cook on a larger scale and to the Bay Area in particular as a place that is open to new foods and cultures.

Taishoken will serve tsukemen ramen, though the broth will be richer and gamier than at locations in Japan, where the broth has a "sweet and sour flavor," Sakaguchi said. (The original broth reportedly has sugar and vinegar in it.)

"Curious customers began requesting this dish, and it was put on the hot summer days," the Taishoken website reads. "The staff would eat the cold leftover noodles by dipping it into a hot soup. Sixty years later, the dish is now one of the national foods of ramen culture in Japan."

Lunch at Taishoken San Mateo will be a more casual affair and dinner "more like fine-dining," Sakaguchi said, with small plates and drinks.

Sakaguchi said he was drawn to San Mateo because of the city's Japanese culinary culture. San Mateo is home to numerous ramen shops, sushi bars and the longtime Japanese-Hawaiian Takahashi Market, opened by a Japanese immigrant in the early 1900s.

Sakaguchi envisions this to be the first of many Taishoken locations in America. He plans to expand throughout California; then to Portland, Oregon; and gradually, the East Coast.

Taishoken is one of several prominent Japanese ramen chains to expand to the Bay Area in recent years, including Mensho, Ramen Nagi and Ippudo. Afuri Ramen + Dumpling is also opening in Cupertino this summer.