For the time being, Bevri is open only for dinner, 5-8 p.m., on weekdays. Owner Pavel Sirotin said he is planning a "complete opening" later in February.

Sirotin, who is from Russia, decided to open Bevri after moving to the Bay Area and noticing the absence of Georgian food. He took over the Bryant Street space after Vero Ristorante closed.

A sample soft-opening menu, which Sirotin said is changing almost daily, includes traditional Georgian dishes such as eggplant rolls, pkhali (a mixture made from spinach, beets, walnuts and other ingredients), khinkali (dumplings filled with meat and/or vegetables) and khachapuri (a large boat-shaped piece bread filled with cheese and an egg). There are also meat kebabs, lamb ribs and a pressed whole chicken for entrees.

Check out the sample menu below: 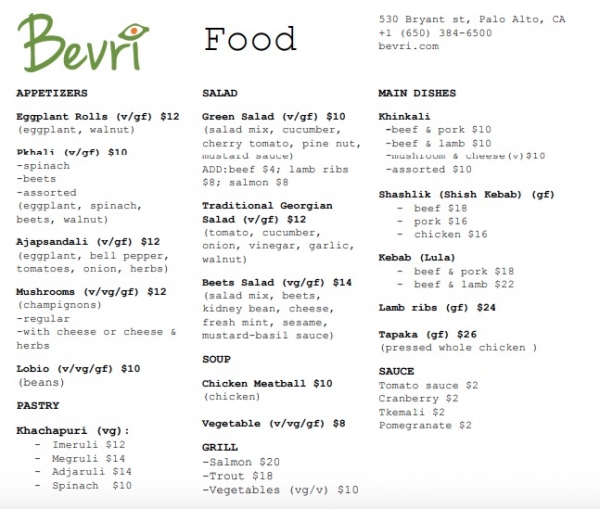 Reservations are required to dine at Bevri during its soft-opening phase. They can be made online at bevri.com.