Two veterans of the local culinary scene who met at Evvia Estiatorio in Palo Alto 10 years ago are finally pursuing a decade-long dream of opening their own restaurant.

Thanasis Pashalidis and Hakan Bala are behind Taverna, a Hellenic restaurant opening at 800 Emerson St. They took over the space from the owners of La Morenita, which is set to close Friday, Dec. 29. 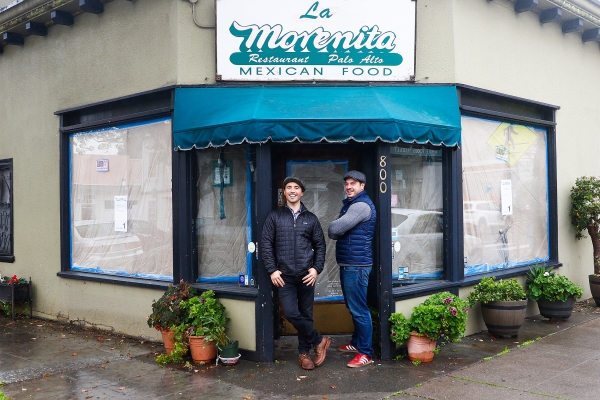 Bala, a native of Turkey, has worked as a server at Evvia for the last decade. Pashalidis, who is Greek, worked at Evvia and San Francisco sister restaurant Kokkari for eight years before stints as captain server at the Michelin-starred Village Pub in Woodside and manager at Mayfield Bakery & Cafe in Palo Alto.

Taverna will be a farm-to-table, "Hellenic-inspired" neighborhood restaurant open for lunch and dinner, the two said in an interview Thursday. There will be a "strong emphasis" on seasonality and vegetables, as well as seafood and wine (both local and international). They plan to make pasta and charcuterie items in house. Pashalidis said they hope to expose diners to lesser-known Hellenic dishes.

The co-owners, both Palo Alto residents, said they want Taverna to be a place for people to take a break from what Pashalidis described as the "rat race of Palo Alto."

He said they're not trying to compete with their alma mater, Evvia, which anchors the other end of Emerson Street several blocks away.

"To be even categorized in that, one, is an honor, but I can't compete. It's like saying my uncle is my competition," he said. "It really is family."

They hope to open Taverna by this spring.