Protégé Restaurant, the project from a former sommelier and sous chef from the renowned French Laundry in Yountville, has missed its original hoped-for opening in late 2016 (and then early this year), but this week it secured unanimous approvals from the City of Palo Alto's Planning and Transportation Commission and Architectural Review Board.

This was a significant step forward for the restaurateurs and building owner, who at Thursday's Architectural Review Board meeting described their frustration with the 18-month-long process that’s been dogged by delays and confusion. It’s been so frustrating, owner Mark Conroe said, that he is "very, very close to losing this tenant."

They plan to open the restaurant on the ground floor of 260 California Ave., a 26,000-square-feet, three-story building with office space on the second and third floors. 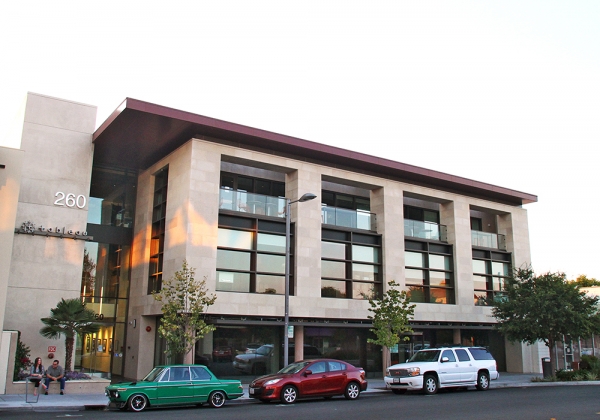 The future home of Protégé Restaurant in Palo Alto. Photo by Veronica Weber.

The approvals were a step backward, however, for Jeff Levinsky, a Palo Alto resident and land-use watchdog who requested this week's hearings. Levinsky said at Thursday's meeting that he was concerned about inconsistencies in square footage in different versions of the project plans, raising questions about whether the building exceeds the density limit for its zone and if it is meeting its parking requirements in a neighborhood already heavily impacted by parking and development. (For more detail about these issues, read this Palo Alto Weekly story: High-end restaurant sparks debate over outdoor seating.)

"The goal is not to delay the project," Levinsky said. "The goal is to make sure the laws are followed."

Conroe disagreed, responding that "we are code compliant in all respects."

Conroe said he convinced the two French Laundry alums, master sommelier Dennis Kelly and chef Anthony Secviar, to open a restaurant in Palo Alto after four years of searching for the right tenant for 260 California Ave. He and Secviar characterized the approval process as now slowed by Levinsky's concerns, which Conroe called a "private audit."

Secviar described himself and his partner, Kelly, as "local residents with a vision and a desire to open a small business in Palo Alto."

"It is our dream to have a world-class restaurant here in the heart of Silicon Valley, to train employees in the culinary arts, to employ people and to serve our community," he told ARB members. "After nearly 10 months of delays relating to permits, to say we are frustrated is but the tip of the iceberg."

He said they feel "hostage to a debate in how the city enforces laws we are following" and urged the ARB to approve the project.

Despite concerns about some details of the project, the board ultimately shared the applicants' urgency in moving it forward. Board member Peter Baltay said it was "inappropriate" for the board to revisit a floor area ratio already established when ARB approved the California Avenue building in 2012. Outdoor seating, he argued, also should not be counted toward the building's floor area ratio.

"It seems to me that's not the intent of the code," he said. "That's not what we want to be encouraging in our town. We're going to lose these wonderful spaces."

The more "legitimate issue," he and other board members agreed, was that the applicant changed the ground-floor space's original designation from retail to restaurant. This comes with an increased parking requirement, which Conroe and the restaurateurs plan to meet by building a mechanical parking lift in an existing basement garage. Staff said the lift is intended for employees who work in office space in the upper floors of the building, rather than for restaurant patrons.

California Avenue's "parking crisis" was the overall context for Levinsky's concerns, he said.

"We don't want more buildings that create parking problems by exceeding their parking allowance," he said.

The board ultimately voted 4-0, with member Kyu Kim absent, to move the project forward. This followed the Planning and Transportation Commission's 5-0 approval, with Commissioner Przemek Gardias abstaining, of a conditional use permit to allow the restaurant to sell beer, wine and liquor.

The planning commission reached its own verdict on Wednesday after a long debate about the various zoning and parking issues associated with the project. Despite some concerns about the city's zoning policies, they agreed that the project warrants approval. Commissioner Eric Rosenblum said that the new restaurant appears to comply both with the law and with the city's vision for a more vibrant California Avenue.

"We always want to consider the public interest in any project. ... Having an empty space is exactly anti-public interest," Rosenblum said.

The next and potentially final step for Protégé is the City Council. The project will be on the council's June 12 consent calendar.

The Protégé website has since been updated with the message: "Pushing (as hard as we can) for a 2017 opening."

Protégé will bring high-level culinary pedigree to Palo Alto. Secviar worked as sous chef at the three-Michelin-starred French Laundry from 2005 to 2011. Kelly was the restaurant's head sommelier for 10 years and was one of only four people to be granted a master sommelier diploma from the Court of Master Sommeliers in 2012.