UPDATE: The Los Altos Planning and Transportation Commission gave its unanimous approval to this project on May 21. Draeger's owner Richard Draeger said the commission wants him to rework some of the landscaping and do a further study of several bulb outs at the main parking lot, but the project will be moving forward to the City Council sometime in July. "We?re happy that they were very supportive of the project," Draeger said on Tuesday, May 26. "We?re just, of course, hoping that that momentum carries forward into the City Council meeting."

Local family-owned grocery store chain Draeger's Market is looking to upgrade its Los Altos outpost, with expansion plans set to be reviewed by the Los Altos Planning and Transportation Commission on Thursday, May 21.

Draeger's has proposed expanding the existing building at 342 First St. ? which is "in need of utility, seismic and aesthetic upgrades," an April 17 letter from the project architect to the city notes ? by 2,991-square feet. The project also includes plans to reconfigure the parking lot to add 15 spaces.

"To economically justify the upgrades, the building needs to be expanded and thus increase parking supply," Katherine Blanner of Field Paoli Architects wrote. "The alternative for the owner is to completely demolish the existing building and rebuild, which is cost prohibitive, or sell the property altogether."

So Draeger's is looking to revamp the market with the addition (which would be accommodated by the demolition of a small building adjacent to the market that Draeger's owns), parking improvements, new landscaping and a new on-site loading area. 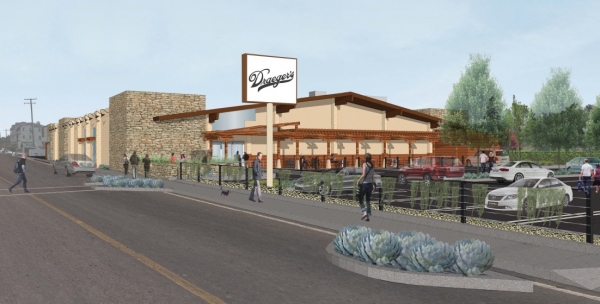 A rendering of the proposed upgrades for Draeger's Market at 342 First St. in Los Altos. Courtesy City of Los Altos.

According to a city staff report, the parking lot's entry driveway on First Street will be relocated further to the north to create a larger separation between the store's front entrance and a midblock crosswalk. Bulb-outs will be added on each side of the driveway entrance to improve visibility for vehicles entering and exiting the site, the report reads. Other improvements will be made to the parking lot ? restriping spaces and widening the "drive aisle" to allow for two-way car movement ? to hopefully improve vehicle flow in the parking lot and cut down on cars lining up at the driveway, the report notes.

Landscape improvements include nine new trees, landscaping in and around the parking lot, a "green wall" along the First Street frontage to screen the parking lot and raised planters around the outdoor seating area, according to the city. All existing trees along Foothill Expressway will be maintained.

The project is not anticipated to create any significant traffic or circulation related impacts, according to the staff report, which sounds supportive of the project.

"Renovating and expanding the Draeger's Market grocery store will strengthen the Downtown core and the City's tax base. A larger, modernized grocery store would function as an anchor store that improves and strengthens Downtown vitality and creates a stronger customer attraction."

Draeger's, which was first founded as a liquor store and deli in San Francisco in 1925, today operates four Bay Area markets in Los Altos, Menlo Park, San Mateo and Danville.

The Planning and Transportation Committee meets on Thursday, May 21, at City Hall, 1 North San Antonio Road, at 7 p.m.