John Withers has owned Kirk's Steakburgers since 1996, when he bought the Palo Alto standby from the son of the original owner, Bill Sincere. Sincere opened the first Kirk's on El Camino Real, near Arastradero Road, in 1948.

But now, in 2015, the restaurant is again changing hands. Withers has sold the no-frills burger joint, now at Town & Country Village, to a South Bay restaurateur who said he plans to update the restaurant, but keep it as Kirk's. 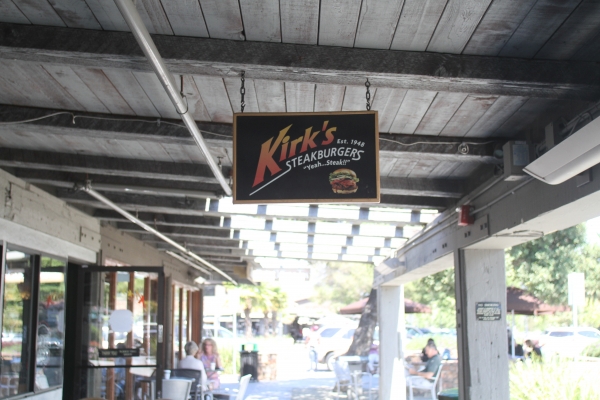 Kirk's Steakburgers, founded in Palo Alto in 1948, moved to the above location at Town & Country Village in 2002. Palo Alto Weekly file photo.

But it will be a changed Kirk's. Juncker said he'll immediately do some physical upgrades ? new chairs and tables, lights, wall coverings ? and take some more time to make some thoughtful tweaks to the menu.

"We're going to try to balance the legacy of the place ? (to) strike a strong balance between keeping what has brought people in for ? some people, 50 years ? and not take that away but also, Palo Alto's a pretty dynamic and diverse community," Juncker said.

He wants to add some menu items that have a "broader appeal," like fusion burgers with Asian or Latin ingredients, poutine or pork belly fries, though he's wary of overdoing it at an establishment like Kirk's.

"Overreaching is my biggest concern," Juncker said. "We want to bring some stuff in and be creative, but not try to be something it's not."

Kirk's has long been famous for its massive steakburgers, grilled over charcoal since 1948, first in Palo Alto and later at outposts in Campbell and Cupertino. John Withers, who oversaw the restaurant's move from California Avenue to Town & Country in 2002, was the first one to expand the originally bare-bones menu, eventually adding french fries, chicken sandwiches, milkshakes, salads and sides.

("Bill Sincere was irascibly tough, adamant about his menu," Withers said in a 2010 interview. "'Want fries?' he once scowled, 'Go somewhere else.'")

Withers, now 72, has been slowly selling off all the locations. Palo Alto was the last one to go.

"It was time for me to stop doing that and do something different," he said Monday.

Withers said he was never worried about descriptions on Yelp or other review sites about Kirk's being "downscale."

"Kirk's is what it is," he said. "It's been in business since 1948. There are a lot of things that have come along since then and Kirk's has survived it all. I've never been one to have many frou frou things. There are restaurants where you can have burgers with truffles and things like that.

"If I started doing those kind of things, that wouldn't be Kirk's."

"Kirk's is what it is and that's the struggle that we'll have ? to try to be creative and be innovative without coming off as trying to be too fancy," Juncker echoed. "It's still a burger joint."

Expect to see the physical upgrades in the next few weeks and the menu changes around April 1, Juncker said.

Withers said he could never figure out how to make a veggie or turkey burger or sweet potato fries that would still be true to Kirk's, so he didn't.

"He's (Juncker) going to probably do things like that, and that's great. I'm not one to stand in the way of the progress. It just wasn't for me," Withers said.

Withers expressed confidence in Juncker and wished him the best. He also said Town & Country management and owners have been "unbelievably helpful and cooperative."

"They deserve a shout-out for that," he said.