3G's Cafe, tucked away on Cambridge Avenue one block off California Avenue, has since 2011 attracted a loyal following of coffee and cuñape lovers.

It was opened by three sisters (3G's stands for three girls) who spent years fine-tuning family recipes for Bolivian fare such as cuñapes (savory biscuits made from yucca flour and cheese) and salteñas (savory pastry pockets, similar to empanadas, stuffed with meat and/or vegetables) as well as pastries, soups and other dishes.

Those loyal followers might have been alarmed (this writer was) when a handwritten sign suddenly appeared in the 3G's window last week:

"To our beloved 3G cuñape, salteña, coffee lovers and our future customers: We're sorry! The café is under preparation for new opening (Beans 'n Bites). But we will be back in one week (pinky promise) with the same delicious goods and much more! We look forward to seeing all of you again and meeting new friends."

As it turns out, the three sisters were overwhelmed with the demands of the café. One, Fatima, still runs a dental office in Newark and was constantly commuting back and forth. Baking every day left less time to spend with family. They had decided to sell the 456 Cambridge Ave. cafe. 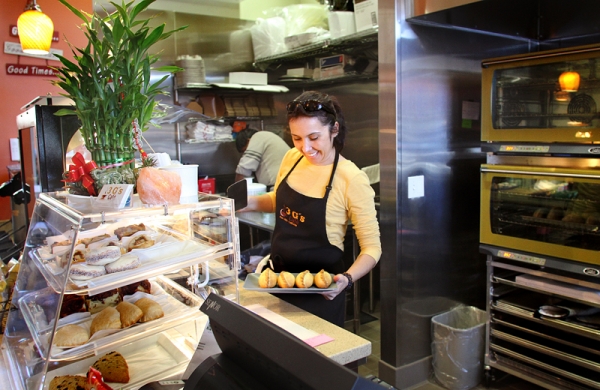 Gloria Justiniano, one of the previous owners of 3G's Café, brings out a plate of just baked salteñas for customers in November 2011. Photo by Veronica Weber.

By some strange twist of fate, a 3G's customer who has always wanted to operate her own café mentioned that to one of the sisters.

"Two weeks later, here I am," said Valery Yu, a 22-year-old University of California, Berkeley graduate. She took over the café with her two parents, who used to own a Chinese restaurant near Berkeley.

Yu, an economics major, was in the second round of interviews for a job at a startup when she decided to take the plunge and pursue a longtime dream.

"It was a big, big step. I was interviewing for a management job for a startup company, and then I decided, you know what, I really, really want to do this."

3G's reopened as Beans 'n Bites on Monday, though the three sisters' signage is still in place ? and, to much relief, much of their defining fare. They'll continue to make their famous cuñapes and salteñas for the Yus; the coffee offerings will also stay the same. Hours will remain roughly the same, Yu said.

Yu plans to make the sandwiches more of a "make your own type of thing" where customers can choose the bread, meat, cheese and other ingredients. The family is also baking sandwich bread and pastries fresh daily. New salads might feature smoked salmon or what Yu calls the "San Francisco salad" with strawberries and mango.

The Yus are waking up at 3 a.m. to make everything fresh daily and commute from their new home in San Francisco.

"I really want to put my heart into the food that I serve and hopefully as (it) starts picking up after awhile, that will really shine through," Yu said.