By John Raftrey And Lori McCormick

A few weeks ago I spent time touring five Oregon colleges with a busload of independent college counselors with the Higher Education Consultants Association. Whenever I tour a college I want to answer the question, "Why would a student from the Silicon Valley want to come here?" After all, Northern California provides a wide variety of quality schools for all types of students. The only thing Northern California doesn't have is a national small liberal arts college. (SLAC)

So I'll try to answer the question for the colleges we visited. The first day was sunny in Oregon and all the campuses looked terrific. Keep in mind a college visit is only part of your decision to attend a school. You could be there on a rainy day, get a bad student tour guide, or be burned out from seeing 12 colleges in 5 days.

First up was Pacific University in Pacific Grove, Oregon, a small town 30 miles from Portland. Pacific is a small liberal arts college (SLAC) of about 1600 undergraduate students in Pacific Grove along with about 1800 graduate students split between the Forest Grove Campus and the Health Sciences campus in Hillsboro. Pacific has extensive pre-professional programs in the health sciences, especially outside of pre-medical school. Pacific has graduate schools in Optometry, Pharmacy, and Physical Therapy and they highlight how they prepare their undergraduates for admission to these schools. One of their most popular undergraduate majors is exercise science. Despite the focus on health, the admission profile is modest and a student with SAT scores around 500 in each section or an ACT 20.

Why would you come to Pacific University? You are a 2.9 student who wants to prepare to be a pharmacist, optometrist or study exercise science and are looking for a small college not too far from a big city.

Caution: Do not confuse Pacific University with the 16 other colleges with Pacific in their name!

The bus next headed out to Linfield College in McMinnville, Oregon, a small town that even though it is only about 40 miles from Portland, it really does feel like a true small town. Linville is a SLAC with about 1700 students in McMinnville and 344 at the Nursing School in Portland. One Bay Area tie is that about half the campus used to be owned by Hewlett Packard.

Linfield is a classic SLAC that primarily serves students from Oregon, Washington and California. Its admission is more competitive than Pacific University, but you can still get admitted with a 3.0 and SAT scores in the 500's. However the school is more serious than its admission statistics would indicate. One of the counselors on the tour told the story of the student who got into NYU, but didn't get enough financial aid so she had to select another school. Linfield gave her ample financial aid and she starts there in the fall. Linfield has had graduates admitted to Yale Medical School and Harvard Law School.

Why would you come to Linfield? You want the benefits of a small liberal arts college but you don't quite have the grades to get into one of the five more well-known Pacific Northwest SLACs (Lewis and Clark, Puget Sound, Reed, Whitman and Willamette). You might also want to come here if you could get into a more selective college, but want to attend a good school where you have a chance to be at the top of your class and be a very competitive grad school applicant.

Day one wrapped up at Willamette University, a fairly large SLAC in Salem, Oregon with about 2000 undergraduates and 700 graduate students. While students come from all over the country, the biggest contingents are from Oregon, California and Washington. Willamette is a first rate small college with a growing national reputation, helped by its recent inclusion in the book and website, "Colleges That Change Lives." (ctcl.org). We had an impressive student tour guide Austin Guimond, who turned down the more well-known Bates College in Maine to attend Willamette.
Here is Austin showing his college tour guide skills of walking backwards and talking at the same time. 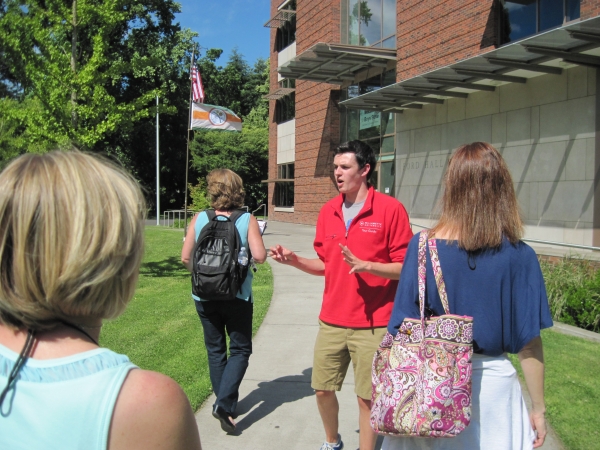 Willamette sends its graduates to name brand companies and top law and med schools. Willamette has a 58% admission rate and admits students with 3.5 GPA and SAT scores around 600. They have students above and below these numbers.

Why you would want to come to Willamette? First of all it is small liberal arts school. Bay Area students have to travel to the Pacific Northwest, Southern California or the East Coast if they want to attend a SLAC. Willamette is right across the street from the State Capital, so if politics is your passion, you will have great opportunities for internships. Finally, Willamette has strong science departments. Sometimes students forget that the sciences are taught at liberal arts schools and they have research opportunities because they don't have grad students like the big schools. (Although big schools also have undergraduate research opportunities, too.)

How do you know which Pacific Northwest SLAC is for you? It is not unusual for Silicon Valley students to be accepted at Lewis and Clark, Puget Sound and Willamette and sometimes Reed and Whitman which are more selective. The only way to know is to visit. I sometimes think that if you've seen one large state university you've seen them all, but with the SLACs it is different. Visit during the school year when you can get a feel for which students are the ones you think you can hang with for four years.

Day two was devoted to big schools Oregon and Oregon State. I'm going to talk about these trips together. The big difference is that Oregon State, in addition to liberal arts and science colleges, has an engineering school. It is also apparent that if you live in Oregon you are either a Duck or a Beaver and no one is both. Although nothing explicit was said I got the feeling the rivalry was more than just a football thing. I'd love to have a Duck or Beaver reader explain this to me!

Oregon, affectionately known as UC-Eugene, attracts three times as many freshman from California as Oregon State. The schools have nearly identical profiles for their freshman class statistics. A Silicon Valley student can usually get into either school with a 3.0 GPA. Students with high grades and test scores frequently are awarded merit scholarships which bring the cost of the schools closer to the cost of a UC. Don't let the low admission stats fool you. These are typical state schools that educate all types of students who live in the state. The top students at Oregon and OSU are just as strong as the students at Berkeley, but Oregon and OSU educate more students in the middle than Berkeley. About 5-7% of students at these schools scored over 700 on a section of the SAT's and they have top students from Oregon high schools. The president of Columbia University, Lee Bollinger, is a Duck.

While at Oregon we were trying to get a feel for the science and pre-med experience. There is undergraduate research available, however it is competitive and students frequently have to interview with professors who have their pick of students. At big schools, organic chemistry is frequently the class that separates the serious pre-med students from the doctor wannabees. Our tour guide, a real Duck who wasn't wearing rain gear even though it was sprinkling, told us his organic chemistry class had about 400 students on the first day of the first semester and by the last day on the second semester the class had dwindled to around 100 students.

While at Oregon State I kept thinking this would be a great place to go to college and I think more Californians will discover the engineering department as more and more students want to study computer science and are not able to get into a UC or even a selective CSU computer science department like San Jose State University. We quizzed our biology major tour guide on her undergraduate research experience. She was able to do ecology research studying samples from a local river, but it was not clear how rigorous the research was. When you visit schools, try to pin them down on specific undergraduate research examples. If grad school is your goal, make sure your research opportunities will compete well with the opportunities other students have had, some whom are doing ground-breaking publishable work.

Why would you want to go to Oregon? You want to go to a big, highly regarded public research university, want to live in Oregon and may not have the grades for a UC. Some California students may decide Oregon is a better fit for them than a UC, even if they could get into a UC. The high flying football team is a plus for sports fans.

Why would you want to go to Oregon State? You want to go to big (5600 students) public research engineering school to launch your career and don't have the grades for a UC. Or you may decide being a Beaver is a great fit for you, even if you could get into a UC or don't just want to be an engineer. OSU grads invented the first artificial heart valve, the computer mouse, and the concept of email. OSU sports fans are fervently loyal to the Beavers, despite their underdog status on most sports. It is unlikely there will be any more Michelle Obama sightings on campus, since her brother was recently fired as the basketball coach.

The state of Oregon is not just California North. It has its own unique vibe, and if you
think it might resonate with you, it's worth a trip to check it out.

That's the report from Oregon. Later this month I'm touring Southern California colleges and I'll file another trip report then.

If you find some gems while you're touring colleges this summer, file your own trip report in the comments below!
-John