While Silicon Valley billionaire and co-founder of Sun Microsystems Vinod Khosla took the stand Monday in a lawsuit about barring public access to the iconic Martins Beach, 6 miles south of Half Moon Bay, I was paying witness to its beauty with a picnic on the public beach.

Hallowed by surfers for nearly a century, Martins Beach closed to cars after Khosla bought it in 2008, challenging a 1972 California Coastal Zone Conservation Initiative making coastal lands public property. In response, the Surfrider Foundation sued Khosla for violating the California Coastal Act, and long story short, Khosla was ordered by the judge to accompany his lawyers to court this past Monday.

I didn't know where Martins Beach was, but a quick google search found it. A few surfers said you can still walk the road to the beach, and I wanted to find out. Google map dropped me off, I parked on Highway 1 (next to another car I might add) and took off on foot. I walked past a few houses, a person, and onto a trail - then down along a creek to a magnificent coastal beach hideaway. Wow.

With a Planet of the Apes view at the fore, I popped open Spring Mix with Goat Cheese, Toasted Almonds and Fresh Strawberry Balsamic Vinaigrette, when a tanned, shirtless, shoeless, surfer-god emerged from the rocks demanding who I was, and where I was from. Knowing full well he was doing the same thing I was (that was his car I assume) I was slow to respond. But he kept nagging...

"You're no local," he repeated. "What are you doing here? You suburban people who sit in front of your computers all day long have no respect. And you don't know how to appreciate sacred spaces."

Ok, I knew this guy wasn't Khosla's son, but who was he? Tanned and Tatted with the letters HMB tattooed on his abdomen and a half moon on his neck. Passionate sure, but just a surfer lookin' for a good spot like me? (I'm a boogie boarder). Surfer on a power trip.

Me: "You don't own this land and the beach is open to all."

He: "You had to trespass to get here, I'm going to call the sheriff."

He: "If you were a guy I would have punched you in the face by now."

Hmm, ok well, so much for appreciating the sacred. I took my seasonal salad and left. When I got back to the road, a pickup drove by and asked me what I was looking for.

The guy looked quizzically and replied, "No, a...that's a mile and a half up the road. Look for the green billboard."

So please - count this as my official apology to whoever owned that piece of property. Like Tanned and Tatted said, guess I'm just another suburbanite led astray by their computer. One who is grateful to see that amazing secret public beach just passed your property line by the way.

I got back in the car and drove south. Sure enough, there was the road less traveled. Ready for me to walk on, but an adventure saved for another day. Instead of Martins, I ended up at a terrific boogie board beach near by. I won't tell you where it is because you'll start going too. But you can try and guess....

The salad was still cool. 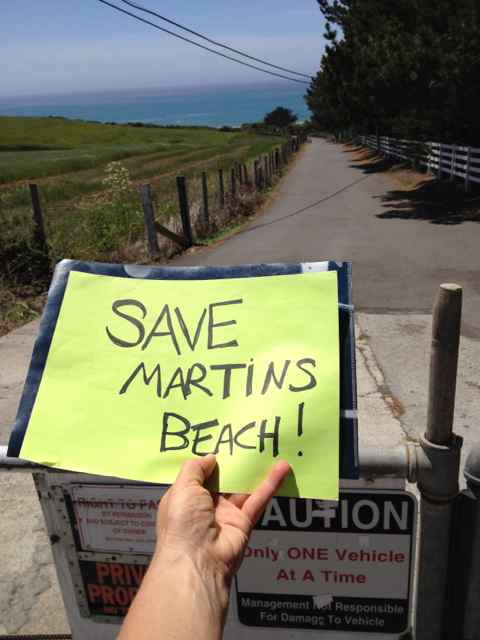 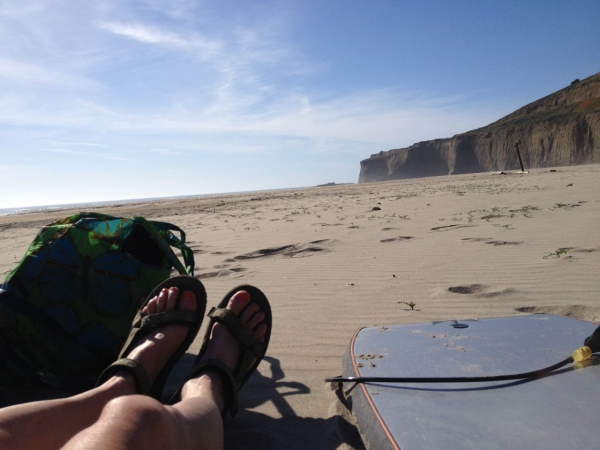 Purée the vinegar and strawberries in a blender with salt and pepper to taste. Toss lettuce with dressing. Divide salad among 4 plates and top with strawberries, goat cheese, and almonds. 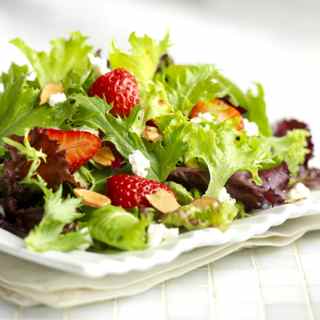