Guillaume Bienaimé, the former executive chef at now-shuttered Marché in Menlo Park, is opening his own restaurant in downtown Palo Alto.

Bienaimé got the keys to the long dormant Roast Shop space at 565 Bryant St. at the end of February. He's planning to move in a restaurant that's "market-driven and French inspired," he said. "Classic dishes, updated with modern technique and seasonal ingredients."

The restaurant will be named Zola, after French author Émile Zola. Bienaimé is hoping for a end-of-May opening.

"I've always wanted to open my own place," Bienaimé said. "This space just came up at a time when I was ready for it. Preparation meets opportunity I guess. I'm just trying to bring some honest food to Palo Alto. Inspired by the market, a menu driven by chefs, progressive wine, down to earth service."

Zola will serve beer and wine only; the wine list will be "small and progressive, focusing on natural wines," Bienaimé said. "It will be complimented with a selection of unique and tasty beers and possibly cocktails inspired by vermouths, sherries and liquors."

In order to turn what used to be a Kosher deli into a French bistro, Bienaimé is bringing in San Francisco designer Charles de Lisle to revamp the 13,000-square-foot downtown space. Bienaimé said he's thinking "casual yet elegant" with classic Thonet bistro chairs, white oak tables and no table cloths. The restaurant will seat about 40 people, he said.

Bienaimé spent two years at French fine dining establishment Marché before it closed in March 2011. The next year, he went on to open Portola Kitchen, an Italian restaurant in the Ladera County Shopper on Alpine Road. 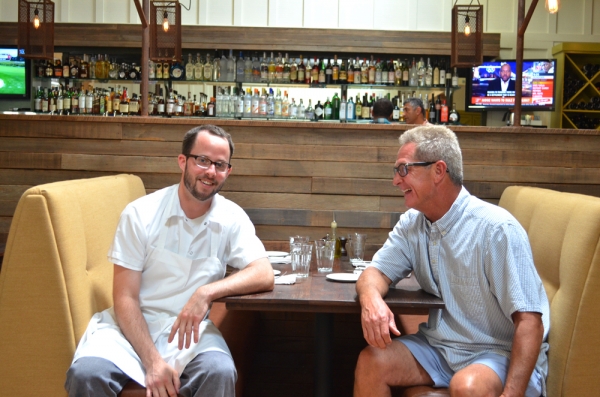 Guillaume Bienaimé, left, and Portola Kitchen owner Mike Wallau sit and chat in a booth after the lunch rush in August 2012. Almanac photo by Daniella Sanchez.

Bienaimé was born in France but was raised in Palo Alto and Philadelphia. He eventually received a culinary degree from Johnson & Wales College of Culinary Arts in Providence, R.I.