Wing Fat’s numerous owners toiled away for their children’s benefit. The restaurant’s closure marks their success, but it’s still hard to say goodbye. 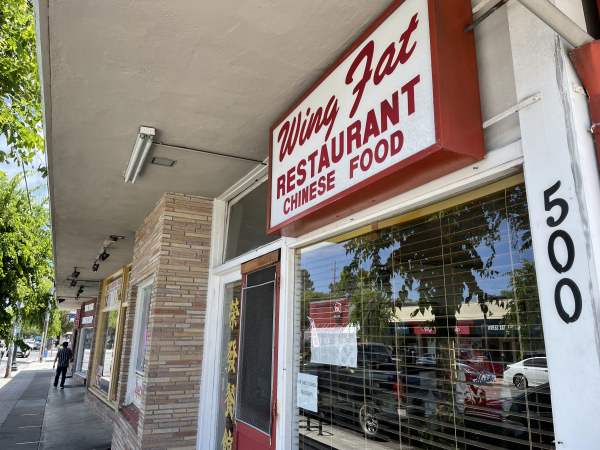 Wing Fat in San Mateo will close its doors on July 24 after 84 years of operation. Photo by Anthony Shu.


For nearly a century, customers have formed lines at San Mateo's Wing Fat Chinese Restaurant in search of smoky, sweet char siu, barbecue pork roasted in an oven crafted in the 1940s. However, after 84 years, July 24 will be the last day of operations for Wing Fat, as the restaurant is one of several local businesses that will make way for a new development. 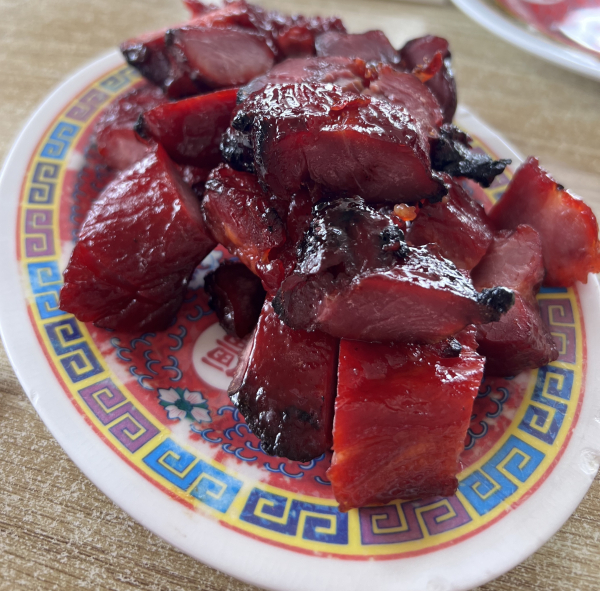 Inside the restaurant, parents missed family events for nights spent sweating over woks, and the toddlers who learned to read beside shelves of dusty cans now have children of their own. The restaurant has allowed these younger generations to live more comfortably than their parents ever did.

Wing Fat has now drawn a string of longtime customers to say goodbye, and bidding the eatery farewell has become challenging for the families that operated it. 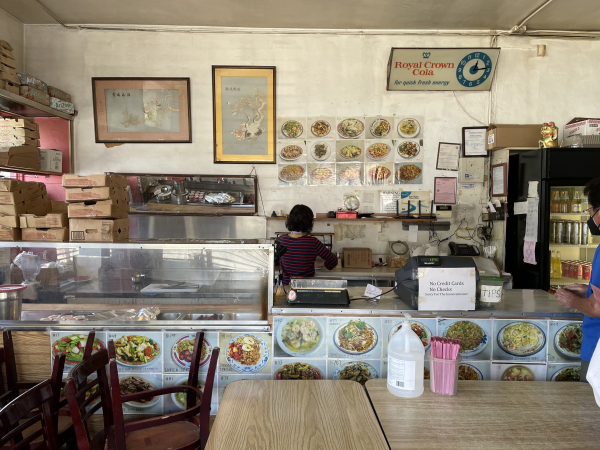 The interior of Wing Fat in San Mateo. Photo by Anthony Shu.

Wing Fat is part of an earlier generation of Chinese restaurants, a counter serving relics of Cantonese American cuisine that are starting to fade away on the Peninsula. Photographs of each item hang in slightly greasy sheet protectors, and mounds of fried wontons sell for less than $10. The ornate plates holding lunch specials are piled with fried rice and noodles rendered dark brown thanks to a generous seasoning of soy sauce, and a chubby egg roll and lightly battered shrimp still find a way to balance on top.

Even though Wing Fat's store window boasts about opening in 1958, the restaurant's history actually dates back even further. Fat Quock, an immigrant from Guangdong, opened Wing Fat around 1947, according to his grandson, Gordon Leong. Quock's son-in-law built and installed the char siu oven that still stands today, and silk tapestries that celebrated the restaurant's original opening still cling onto the walls. 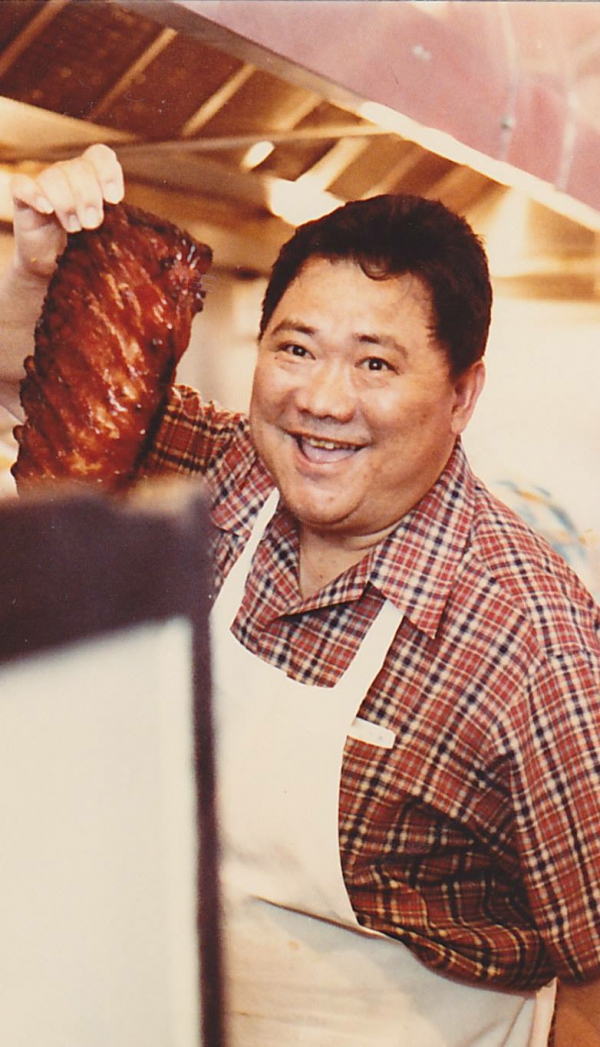 Leung Yuen Tom holding a slab of ribs. This photograph was taken by a Wing Fat customer in 1982. Photo courtesy Wing Fat. 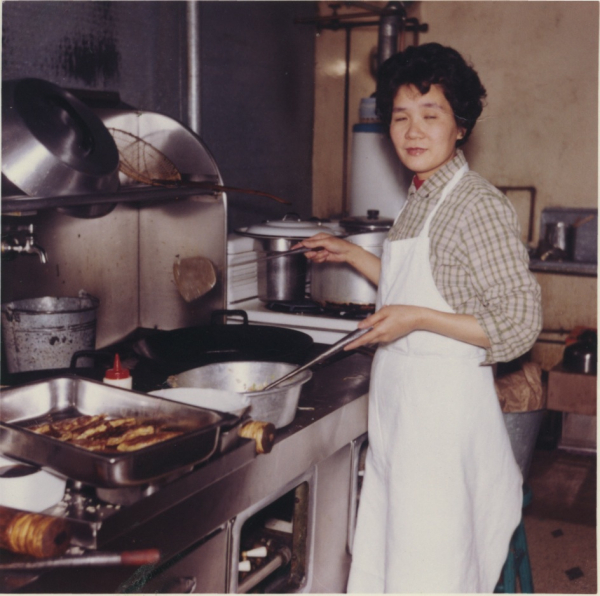 In 1958, You Tin Low purchased the eatery, and while Wing Fat has exchanged hands numerous times between in-laws and siblings, it has served as a home for his family. Longtime restaurantgoers will likely recognize Low's son, Leung Yuen Tom, who shaped the business into its current form. A symbol of his ingenuity was his restaurant's distinctive rooftop sign that advertised "Chinese Food" with one of the e's printed backwards in order to attract attention. Over the years, the restaurant also sold Chinese groceries, served a community of customers from Hawaii by offering manapua, pork buns, and the noodle soup saimin and occasionally entertained celebrities including Cantonese opera stars. 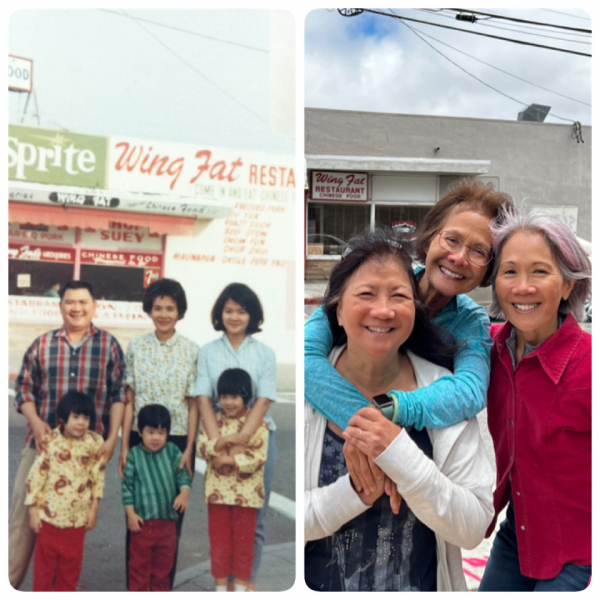 The Tom family in front of Wing Fat, 55 years apart. The first image was taken in 1967. Photo courtesy Wing Fat.

Joanne Chan, Tom's daughter, made 25 cents per four-hour shift at Wing Fat while growing up. She recalls a childhood where the restaurant always took priority. "We didn't have a normal American life … you give up a lot," she says about doing homework among flaming woks and bubbling oil. Today, her father is nearing the end of a battle with Alzheimer's, and Chan knows that his endless hours at the restaurant allow her to share dinner with her children at 6 p.m. instead of late at night. "Dad did it to put food on the table and make (a path) for his children," Chan says.

With cousins, aunts and uncles taking their turns stir-frying noodles, Wing Fat welcomed many of Chan's family members as they first arrived in the United States. Chinese restaurants have long been connected to migration, and in the early 20th century, restaurateurs circumvented anti-Chinese immigration laws in a practice that has been labeled the lo mein loophole. 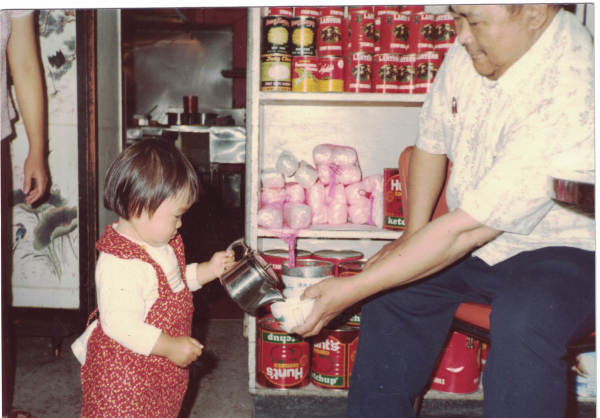 Guests visiting the shop during its last days will see the current owner, Chan's aunt Yan Zheng, behind the counter. Steph Hong, Zheng's daughter, helps out at Wing Fat on weekends and says that they would like to keep the business going. However, the high costs of operating a restaurant today can't coexist with their "hole in the wall," cash-only style.

Along with longtime customers like Dan Gilbrech, a retiree who has barely left the house during the pandemic but made the trip to Wing Fat on a recent Thursday, the restaurant's affordability and understated style has attracted new clientele in recent years. Located in a San Mateo neighborhood with a significant Latino population, the beverage refrigerator is now stocked with Jarritos and Modelo.

And even when Peninsula diners can locate dishes like gravy-soaked tomato beef chow mein, they aren't served at Wing Fat's extremely low prices. A menu where most dishes are still under $10 means that lines at lunchtime include plenty of paint-speckled T-shirts and construction boots. 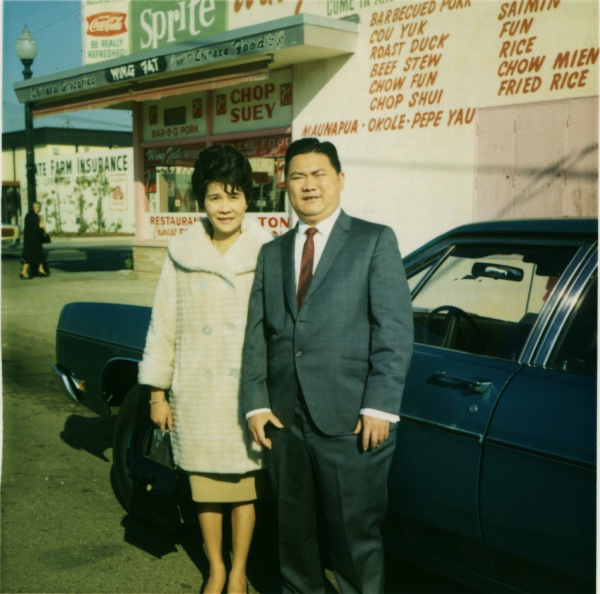 Shiu Yung Tom and Leung Yuen Tom showing off their new station wagon in 1968. It was used to pick up supplies from San Francisco before deliveries to the Peninsula were common. Photo courtesy Wing Fat.


Readers might also encounter Leong at a table covered by over 20 different dishes. He's visited frequently over the past month even though his family hasn't been involved in Wing Fat's operations for over 60 years. He wasn't born when they sold the business but still feels a deep attachment to the restaurant.

"You get the feeling that something's gonna be missing. I've had that emptiness feeling," he says.

The owners have no stake in New Wing Fat, located one block away.

Guests are invited to contribute memories of Wing Fat on its Facebook page.

Sherry Listgarten is a registered user.


Anthony, this is a beautiful blog post and a really lovely way to recognize the history and impact of this restaurant and others like it. Thank you!

Report Objectionable Content
Posted by Online Name, a resident of Embarcadero Oaks/Leland,
on Jul 28, 2022 at 11:51 am
Online Name is a registered user.


And yet another strip of redeveloped boring buildings with no character, no individuality, no small businesses like this. Let's hear it for "progress"

New sushi restaurant and steakhouse coming to Palo Alto in 2023
By The Peninsula Foodist | 5 comments | 3,023 views

What Do You Get Out of Being Stubborn?
By Chandrama Anderson | 0 comments | 1,606 views