Uploaded: Feb 3, 2021
Like many of us, Nick Rappoport became obsessed with baking bread during the pandemic.

But he wasn't making crusty sourdough loaves. The chef was after sandwich rolls — specifically, a Dutch Crunch hoagie-style roll that melds East and West coast sensibilities.

Eventually, it only made sense to make a sandwich on the roll, and Rozmary Kitchen was born.

A Rozmary Kitchen sandwich on a custom Dutch Crunch roll made by The Midwife and the Baker in Mountain View. Photo by Elena Kadvany.

Rappoport and his wife, Melissa Johnson, launched their sandwich pop-up last Friday at The Midwife and the Baker in Mountain View, which is now making the Dutch Crunch rolls especially for them. The soft, flavorful rolls (which happen to be vegan) are made from artisan flours and filled with ingredients like coffee-rubbed pastrami and three-hour braised collard greens, pistachio mortadella, cherry pepper relish and Rappoport's own aioli.

"My real goal is to combine East Coast and West Coast sandwiches. I think the West Coast, the Bay Area has some awesome sandwiches," Rappoport said.

Rozmary Kitchen's origin story is by now a familiar one. Rappoport, a chef who's cooked at The French Laundry, Outerlands, Bonny Noon Vineyard and other Bay Area restaurants, got furloughed and eventually laid off at the start of the pandemic from his job as Pinterest's chef de cuisine. He filled his days with baking rolls, developing sandwich recipes, sampling the Bay Area's best shops and fantasizing about opening his own deli. 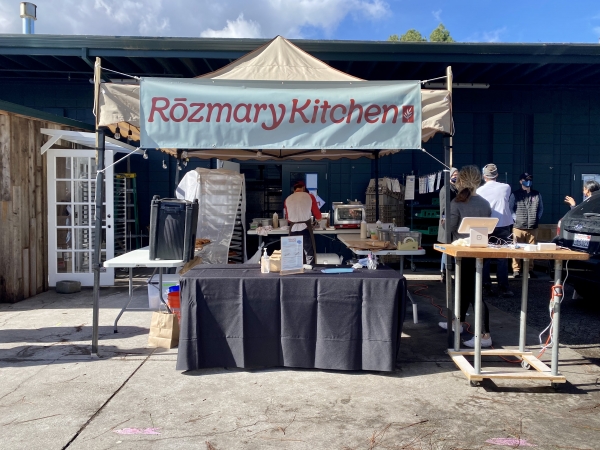 Nick Rappoport, center, and Melissa Johnson, right, at their first Rozmary Kitchen pop-up at The Midwife and the Baker. Photo by Elena Kadvany.

When Johnson, a catering manager at Stanford University, brought home bread from The Midwife and the Baker, something clicked for Rappoport, who knew bakery owner Mac McConnell through a tight-knit local rock climbing community. The two teamed up and honed the sandwich bread to its current iteration: a 10-inch roll shaped in the image of Philadelphia hoagie rolls but made from a blend of whole spelt and bread flours from Central Milling Co. in Petaluma. For even deeper flavor, McConnell preferments the flours. The crunch topping is made from a yeasted brown rice flour with toasted sesame seeds —an ode, Rappoport said, to an early Dutch Crunch recipe that reportedly included sesame seeds.

"I've always liked sandwiches," said Rappoport, who used to look at spaces for a deli on his days off. "I think the real kicker was once I got laid off it was like, this is the time to do it."

Rappoport's sandwiches taste like composed restaurant dishes. Take the "Southern Picnic," which was inspired by a sandwich with collard greens he ate at the Turkey and the Wolf in New Orleans. He cooks coffee-rubbed navel pastrami and then uses the liquid, along with vinegar, sugar, onions, garlic, to braise collard greens from County Line Harvest in Petaluma for three hours. He slathers the roll with his own pimento cheese and layers in sliced raw white onion. 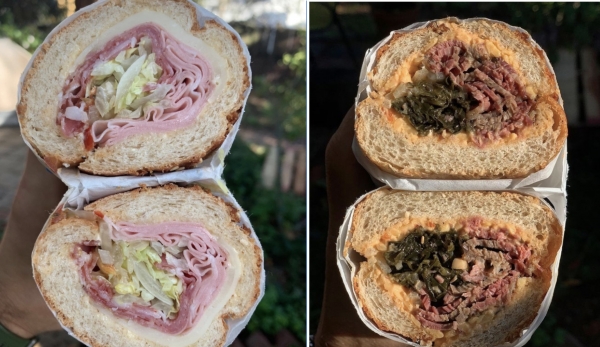 "I want it to hit every sense — the sweet, salty, tangy, umami," Rappoport said. 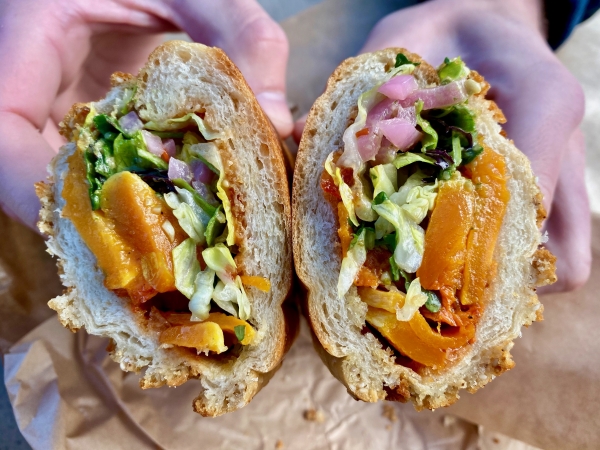 Rappoport plans to make his own sandwich meats down the line but for now is sourcing them from Fra' Mani Handcrafted Foods in Berkeley. Future menu items include a breakfast sandwich on Midwife and the Baker brioche rolls and chocolate chip cookies made by Johnson. They also plan to set up shop at local farmers markets.

Every Friday from 10 a.m. to 2 p.m., you can find Rozmary Kitchen set up in the parking lot outside The Midwife and the Baker, with Rappoport churning out sandwiches and Johnson manning the front of the house. If you experienced a long wait at their first pop-up, don't worry; they're now doing preorders only with set pickup times. (If you go early enough, you can also snag some croissants, bread, focaccia and other baked goods from The Midwife and the Baker, which is open for preorders and walk-ups from 7 a.m. to 12:30 p.m.)

For more and to order, go to rozmarykitchen.com.

Julie O is a registered user.


Oh my goodness, I LOVE their bread (Midwife & the Baker) and now it is so exciting to find out we can get fabulous sandwiches from Rosemary's Kitchen!

We need an audit of city spending
By Diana Diamond | 7 comments | 1,888 views