Tiger Sugar, a massively popular boba tea shop from Taiwan, will be bringing its famed drinks to Cupertino this fall.

Tiger Sugar, which started in Taichung, Taiwan in 2017, has become known for its brown sugar boba streaked with syrup (which look like tiger stripes, hence the name). It's made with a proprietary brown sugar syrup, organic milk from Straus Family Creamery and tapioca. 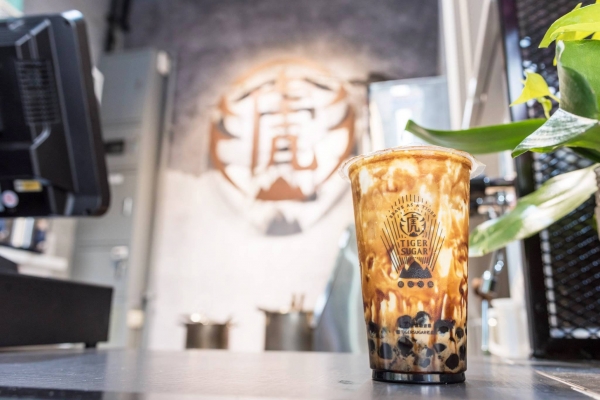 "What really makes Tiger Sugar unique is not just the taste … but also the presentation, visually, the way they put (the drink) together," Chang said. "It really catches a lot of people's attention. That's why you see so many social media images of the drinks everywhere."

The brown sugar boba isn't mixed before it's served to preserve the visual appeal, so it's key to shake the drink — at least 15 times, Chang said — to avoid getting a sip of mostly milk or mostly syrup. (Signs at a Southern California outpost urge customers to first "take a creative picture and upload to Facebook and Instagram" then shake the drink up and down 15 times.)

Tiger Sugar now operates more than 40 locations worldwide, with more on the way, Chang said. He said the company chose Cupertino for its Bay Area debut partly because of requests from people who live in the area but are from Taiwan and are familiar with the Tiger Sugar brand. They plan to open more locations throughout the Bay Area, he said.

Tiger Sugar Cupertino has a large indoor seating area but given local public health mandates, will only open initially for pickup.

In other local boba news, Palo Alto will soon have an outpost of Wanpo Tea Shop, another popular milk tea shop that got its start in Taichung.

+  Like this comment
Posted by KittyCatty, a resident of another community,
on Sep 12, 2020 at 12:05 am
KittyCatty is a registered user.


Im excited to try it! Happy Lemon currently has a similar drink, called Okinawa Milk Tea. I'd like to compare the two, that syrup is to die for. Yum

A fond farewell from the Peninsula Foodist
By paloaltoonline.com | 21 comments | 5,360 views