Uploaded: Aug 3, 2020
After nearly three decades at the helm of the irreverent Buck's of Woodside, owners Jamis and Margaret MacNiven have retired and turned the restaurant over to their three sons.

The younger generation reopened the Woodside restaurant last week for outdoor dining and takeout, with a new patio in the parking lot and a new menu.

"We're happily passing the crown to the boys," said Jamis MacNiven, who opened Buck's in 1990 with his wife Margaret. "They have a good view of the future." 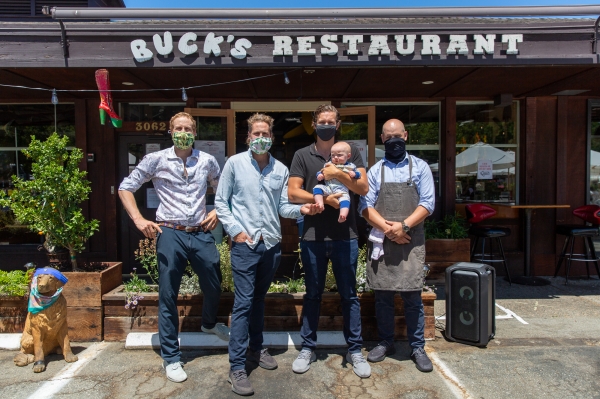 Dylan MacNiven said his parents had been debating this future since closing in March when shelter in place took effect. They had many family meetings to discuss how to best reopen Buck's — whose dining room, decorated floor to ceiling with artwork and funky collectibles, is the heart of the restaurant but cannot legally serve customers right now — amidst constantly changing public health mandates.

"They've been running Buck's for almost 30 years and there was probably retirement on the horizon anyway," Dylan said of his parents. "When we were offered to do an outdoor dining area in the front ... it seemed like a really good opportunity to at least provide something for the town."

Over the years, Buck's became a one-of-a-kind community institution that drew generations of children and families as well as Silicon Valley entrepreneurs, heads of state and famous actors. Jamis MacNiven was known for writing the cheeky menu descriptions and a quarterly travel column that sounded fabricated but was true more often than not. 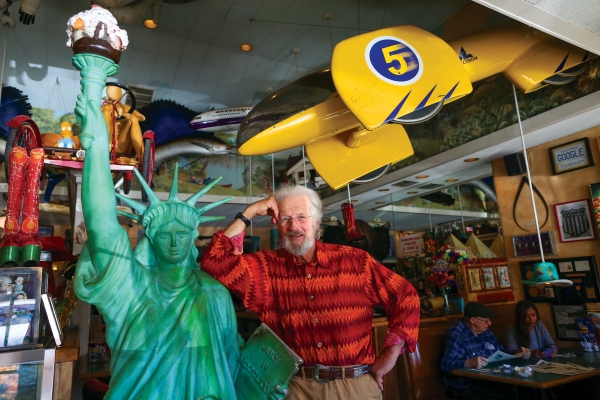 Jamis MacNiven poses with the "real" Statue of Liberty inside Buck's in November 2019. Photo By Sammy Dallal.

In late May, before Buck's had reopened, Jamis MacNiven said he was thinking about turning the restaurant over to their children -- Dylan, Tyler and Rowan -- with "an eye toward the 21st century."

"Much of Buck's is about the past," he wrote in an email, "but we see that an update at some point is necessary."

Tyler said they want to modernize Buck's while still "preserving the integrity of the specialness of Buck’s."

"We watched babies on their second, third day of life come in and watched some of our regulars on the second or third last day of life. That's been the true magic of Buck's. It's a place where life can be experienced," he said. "My brothers and I are pretty keen on keeping that aspect of it alive." 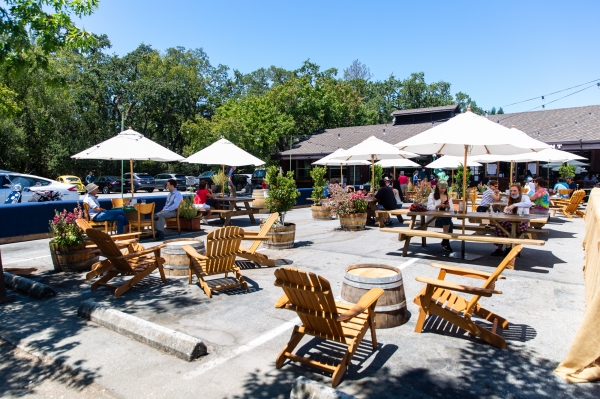 Dylan said they're not trying to recreate the "old Buck's" outside and that the pandemic required a new style of service and pared down menu. Buck's now serves smashburgers, with options for plant-based Impossible Meats and vegan cheese, fish tacos, two salads, milkshakes and beer and wine. They plan to add more items soon, including breakfast. August Schuchman, the executive chef for the sons' San Francisco restaurants, is overseeing the menu revamp.

Diners can eat in the parking-lot-turned-patio created with wooden tables and chairs, plants and some of the interior decor, including the Statue of Liberty that pre-pandemic greeted customers inside the front door holding not a torch but a dripping ice cream sundae (she's now wearing a mask). 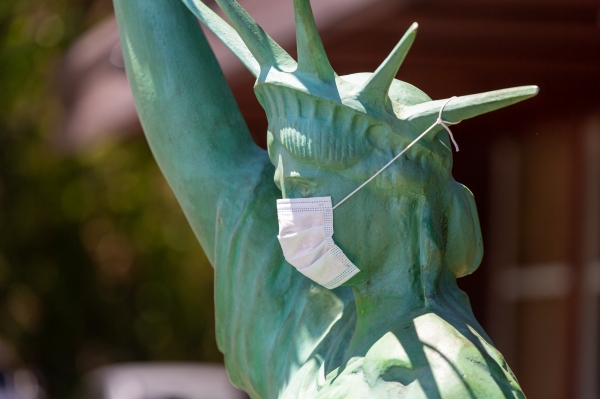 Since reopening, they've been able to bring back about 12 of Buck's 45 staff members.

Dylan said they hope the outdoor patio will sustain the restaurant through the summer and fall while they wait for indoor dining to be allowed again. Long-term, they're thinking about "how to move Buck's into the next phase of its life," he said, which will require a balance between updating the longtime community favorite and maintaining its unique feel.

"We're from a different generation. There's a lot of experience and things that we would bring back as far as our style of service and culinarily," Dylan said. "Buck's has such a unique look — it's not like we're looking to just paint the walls white and remove all the art."

In fact, they plan to continue their father's tradition of collecting unconventional art to decorate the dining room, Tyler said -- as well as having their young children work at the restaurant.

He summed it up succinctly: "Buck’s will never die."

Buck's is open daily from noon to 8 p.m. and until 9 p.m. on Friday and Saturday.


Finally, some GOOD news: Buck's will reopen and never die. Good health and luck to Jamis and the same to his three offspring, who will keep the good times rolling in Woodside.

Report Objectionable Content
+   6 people like this
Posted by Scott Barnum, a resident of Menlo Park: Park Forest,
on Aug 3, 2020 at 12:35 pm
Scott Barnum is a registered user.


Congrats to Jamis and the MacNiven family. You have a great tradition to be proud of and to build on. Best of luck to you all and thank you to Jamis and his better half for a great 30 year run and a fun place to eat and socialize.

Report Objectionable Content
+   5 people like this
Posted by Angela Hey, a resident of Portola Valley: Brookside Park,
on Aug 3, 2020 at 2:02 pm
Angela Hey is a registered user.


Good for you boys - thank you Jamis and Margaret for some great dinners, breakfasts and entertainment. I remember my mother fondly taking a menu to read on the plane back to the UK and telling her it was OK to steal it. I love the virtual tour on the website. You may just be our 3rd opportunity to dine outside during COVID-times - the other 2 being fish & chips on Santa Cruz Wharf and PB08 Indian Bistro in Livermore which was a great treat for outdoor dining. So we'll look forward to a burger - that's not something I ever cook so will be a luxury in these times:)

Report Objectionable Content
+   3 people like this
Posted by Ron Wolf, a resident of Old Mountain View,
on Aug 3, 2020 at 8:00 pm
Ron Wolf is a registered user.


Ah, Jamison, you've done good. I've so enjoyed Buck's over the years. As you know, nothing quite like it. Especially in this era of formula eateries Buck's is all the more special! Enjoy that retirement. Do keep sharing your thoughts & adventures with your quite lively writing.

Report Objectionable Content
+   2 people like this
Posted by Mark Weiss, a resident of Downtown North,
on Aug 8, 2020 at 11:14 pm
Mark Weiss is a registered user.


I'm waiting to see if someone will say:
pass the buck.

An extra helping: Local restaurants unite for two days of fundraising for AAPI group
By The Peninsula Foodist | 0 comments | 1,530 views

Where is it unsafe to bike around town?
By Sherry Listgarten | 23 comments | 1,287 views