Uploaded: Apr 20, 2020
Nearly a year after shutting down in Mountain View, the Milk Pail Market is back -- albeit in a vastly different form.

The beloved market itself is not reopening; with the Bay Area's current public health mandates, wandering through the narrow aisles searching for cheese or smelling fresh fruit in the open-air produce section feels like a distant reality.

Instead, the Milk Pail returned on Friday as a no-contact, drive-through market. People can order online pre-selected boxes of cheese, local bread and other specialty goods and pick them up at The Milk Pail's warehouse on Wyandotte Street in Mountain View. Masked and gloved staff put the boxes in the trunks of people's cars.

"I felt like the the revival of the Milk Pail would be very timely now during a time when people are probably cooped up at home, bored of what they have in their pantry and fridge and so desperately miss a sense of comfort," said Kai Rasmussen, who helped her father, Steve, run the market. "Even without this situation, people were feeling a huge loss for the store." 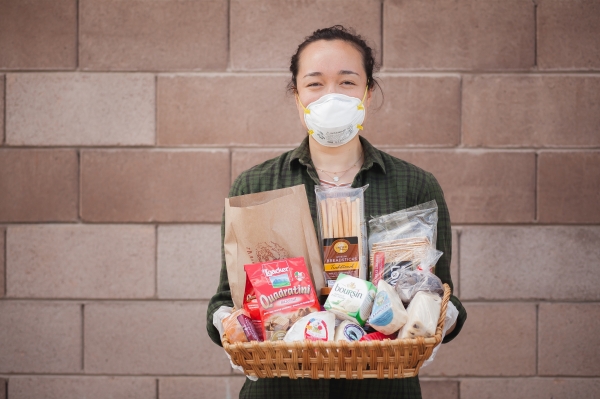 Kai Rasmussen holds a curated basket of products available for pickup at a new drive-through version of the Milk Pail Market. Photo by Elena Pronina.

The Milk Pail closed last summer after Steve Rasmussen accepted a buyout for the property at the corner of San Antonio Road and California Street. He had long been a holdout as the San Antonio shopping center was transformed by redevelopment -- a massive apartment complex, movie theater, chain restaurants and hotel were eventually built around the humble community market.

Kai said before the closure, her family had been thinking about using the Milk Pail's warehouse for a pop-up market, but it didn't pan out at the time. She went back to the University of California at Berkeley to finish her bachelor's degree, which had been delayed while she helped manage the family business. 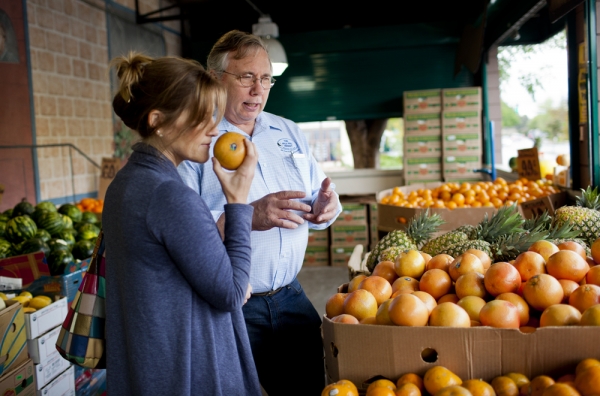 Then, in late March, with the Bay Area's stay-at-home order in effect, Kai posted a survey to the Milk Pail's Facebook page to see whether customers would be interested in a drive-through version of the market. Her sister Erika, from her home in Montana, developed a system for online ordering and payment.

The response was quick. Orders for last week's trial run of the drive-through Milk Pail filled up within a few hours, Kai said. They sold 200 boxes of cheeses, bread from Mountain View's The Midwife and the Baker, Guittard Chocolate, frozen Petit Pains & Co croissants and other European products that were customer favorites.

A few weeks in, the Milk Pail added a produce box ($39) and two size options for the "essentials" boxes with cheese, bread and other specialty items ($50 for small and $75 for large).

Kai hopes to add boxes of fresh, locally sourced produce soon. Down the line, customers could have the option of choosing products for customized boxes.

The Portola Valley farmers market also reopened in March as a drive-through concept.

The Rasmussens plan to continue this model for the foreseeable future.

"We're trying it out and seeing how it goes," Kai said. "People seem to be super enthusiastic about the Milk Pail resurrecting."

Weekly ordering begins Tuesdays at noon for pickup on Saturday and Sunday. To place an order, go to milkpail.com or order [email protected]

Glad to see grocery stores trying different things in these exceptional times. These $75 boxes of cheese, breads, and sweets are awfully high calorie, especially these days when we aren't inviting friends over for dinner. Hope they can offer some lower calorie selections in the future.


I wish you had a smaller box for a family of two.


Would love to see an option to order eggs, dairy, and produce with a drive-through pickup in the area. I'm going to Safeway this afternoon and would much rather give my business to Milk Pail and a drive-through setup, if this was an option.


Would love to see an option to order eggs, dairy, and produce with a drive-through pickup in the area. I'm going to Safeway this afternoon and would much rather give my business to Milk Pail and a drive-through setup, if this was an option.

Report Objectionable Content
Posted by MilkPailLov3r, a resident of Woodside,
on Apr 20, 2020 at 2:33 pm


To those who voice their objections to the types of products offered by the MilkPail - don't shop there. Many of us are grateful for the creative efforts of Kai, and her willingness to try something new. Many of us are grateful to see an old neighborhood friend back in business. Its a new era. The more readily we embrace change, the more readily we express gratitude, the more enjoyable life becomes . . .

Report Objectionable Content
Posted by food nerd, a resident of Another Palo Alto neighborhood,
on Apr 20, 2020 at 8:03 pm


Can someone please help the palo alto farmer's market incorporate a drive through or at least a box pickup concept? We can't stand in those long lines for our favorite markets so we're not able to buy the produce we usually get every week.

I think this is amazing for Milk Pail to do (for us, it's not an either or with the farmer's market, though).

Looking forward to it! We are trying Safeway.com, but were shorted fresh vegetables. We're looking for more options.

Report Objectionable Content
Posted by Rivertown, a resident of Old Palo Alto,
on Apr 21, 2020 at 2:18 pm


Really glad to see the Milk Pail return and hope to see the addition of fresh produce, eggs and dairy. For those looking for fresh produce, I recently tried The Market at Edgewood and was really happy with their pick-up service. I went to their website to type in my list, there is a box to check if you are ok with substitutions or not and I received a call for clarification because of a typo I made ordering 11 bottles of olive oil instead of 1. And a few hours later, I was able to drive up to the front of the store and they came out and loaded the groceries into the trunk of my car. The produce was fresh and all of the products were very good quality and organic, as requested. They didn't have eggs, but I ordered mid-day and so they may have run out by the time I ordered. There is a 15% service fee to order and a delivery option in the Palo Alto area for $15. Grateful to these smaller grocery businesses and happy to support these local options during this time.

Report Objectionable Content
Posted by Pat Markevitch, a resident of Downtown North,
on Apr 21, 2020 at 3:06 pm


You can also order groceries through Coupa Cafe, then pick them up in the Ramona location. I think you have to download the app first.

Report Objectionable Content
Posted by resident, a resident of Downtown North,
on Apr 22, 2020 at 2:49 pm


There is clearly customer demand for no-contact fresh produce pickup or delivery services for everyday food needs (not just luxury items). Current businesses are not meeting the demand. Existing grocery stores are either not accepting new customers or have high fees and high minimums that make them impractical for most consumers. What is keeping new businesses from filling this demand? There must be plenty of unemployed workers who would be happy for the work to help meet pay for their rent or mortgage.

Report Objectionable Content
Posted by Gale Johnson, a resident of Adobe-Meadow,
on Apr 23, 2020 at 10:26 pm
Gale Johnson is a registered user.


I know I might be revealing my age again (old geezer who's lived in town since 1961) but I remember when we first started going there it was a drive thru market. It was the produce, eggs, and dairy products equivalent of the A & W root beer stands on El Camino at that time. Welcome back.

Report Objectionable Content
Posted by LoveMilkPail, a resident of Old Palo Alto,
on Apr 25, 2020 at 3:05 pm


This is truly glorious news! Welcome back, Milk Pail!!!

Report Objectionable Content
Posted by resident, a resident of Downtown North,
on Apr 26, 2020 at 11:03 am


Sounds like they are listening to customer feedback. They now have a $39 basket on their website with just fruits and vegetables (no cheese and candy).


Yay! Welcome back milk pail! Looks like the produce box is already out of stock! Going to try early when it opens up for next week. As some others have mentioned, I would love to add dairy to the produce and all my business would go to Milk Pail :)

Report Objectionable Content
Posted by S Palo Alto Resident , a resident of Monroe Park,
on May 5, 2020 at 10:22 am


Please make sure produce is better quality. We stopped shopping there 7 years before it closed. Produce and fruits rotten within a day of two. Bread cheese ok but produce went down in quality. Along with fresh fruit.

Arya Steakhouse, a standby for steaks and Persian cuisine, moves to downtown Palo Alto
By The Peninsula Foodist | 0 comments | 3,153 views

We need an audit of city spending
By Diana Diamond | 4 comments | 1,472 views