'Are they ready for fully innovative Indian food?' Ettan arrives in Palo Alto with chaat, caviar and a secret menu

Uploaded: Feb 19, 2020
When Ayesha Thapar set out to bring an innovative Indian restaurant to the Peninsula more than two years ago, she made a list.

On the list were the names of 15 chefs — some Indian, some not; mostly in New York and Los Angeles, with only two from the Bay Area — who she was interested partnering with. She cold-emailed them and met with all 15.

Srijith Gopinathan, executive chef at Campton Place Restaurant in the Taj hotel in San Francisco, was low on the list, she said, only because his food is upscale California-Indian and she worried that as a chef with two Michelin stars, he skewed more fine dining than she envisioned for her Palo Alto restaurant, Ettan.

"And then I tasted his food," she said, "and all the other choices disappeared."

Thapar and Gopinathan have left their respective imprints on every aspect of Ettan, from the menu to the aesthetics. Ettan is set to open this Friday, Feb. 21, at 518 Bryant St. 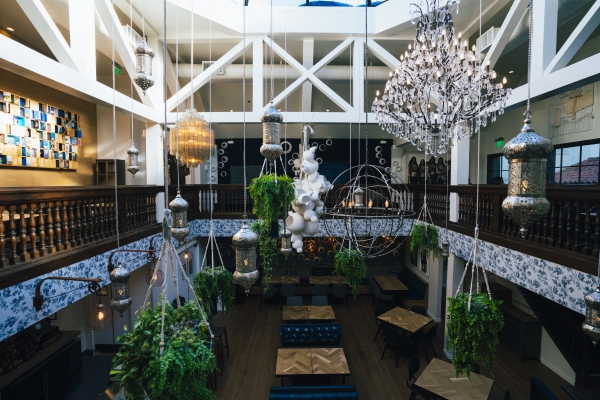 The view from the second floor at Ettan in Palo Alto. Photo courtesy Eric Wolfinger.

Thapar, an Atherton resident who has worked in real-estate development, internet marketing and fashion, decided to open Ettan out of a desire for more diverse dining options on the Peninsula. Gopinathan is a native of Southern India who has drawn accolades for melding Indian and Californian flavors in a white tablecloth setting.

Their shared goal is to showcase Indian food in contemporary, unexpected ways, like serving "zero degree" chaat, a sorbet with the flavors of traditional Indian street food, or decorating the bathrooms with risqué images of from the Kamasutra imposed onto black-and-white Indian cityscapes.

"This is both of us giving a totally different voice to a side of India many people would not expect," Thapar said in an interview at the restaurant.

Thapar took over the Bryant Street building after a kitchen fire closed the former occupant, Vietnamese restaurant Three Seasons, in early 2018. The bones remain, but the three-story, 5,700-square-foot space has been transformed. You now enter the 180-seat restaurant through massive, bright-blue wooden engraved doors, meant to evoke an Indian haveli, surrounded by blue and white patterned tiles. A dark stained-glass atrium has been replaced with clear leaded glass, so natural light floods into the space.

Tables on the second-floor mezzanine, which has its own private bar, look down into the main dining room and bar on the ground floor. Chandeliers, planters and lanterns hang from the atrium. The upstairs will be reserved primarily for private dining but will be open to general diners when available. Ettan will also offer prix fixe family-style sharing menus for large groups on the mezzanine level.

Outside, couches and lounge seating surrounded by plants provide an additional 60 seats.

While Gopinathan acknowledged he's best known for fine dining — and he does plan to eventually add a limited tasting menu at Ettan — he wanted to give the Palo Alto restaurant "a different style." The majority of the menu will change with the seasons and draw from local farmers' markets and farmers Gopinathan has developed relationships with over his 14-year career in the Bay Area. Much of the food is inspired by what Gopinathan ate growing up in Kerala, though he doesn't want to box Ettan in as a Southern Indian restaurant. (He will be splitting his time between Campton Place and Ettan.) 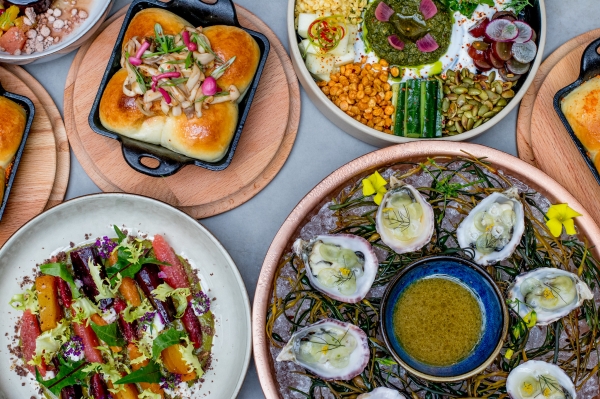 The "graze" section of the menu includes cold and hot small bites, from a private batch of Tsar Nicoulai reserve caviar made for Ettan and local oysters to Indian street food snacks. 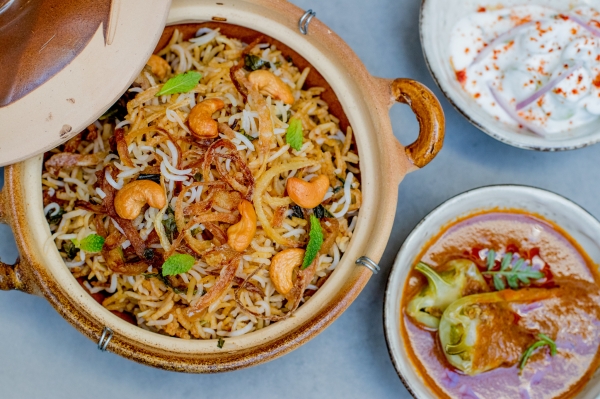 A "feast" section features specials meant to be shared by a group, such as a whole roasted red snapper or baby lamb accompanied by a selection of sauces, rice, breads and vegetables.

Despite Gopinathan's mission to push Indian food out of a mainstream, Americanized box, there will be a "secret" menu for diners looking for more standard Indian dishes, like butter chicken.

"If the question is, 'Are they ready for fully innovative Indian food?' The answer is, 'Yes, but not all of them,'" Gopinathan said of diners.

Helen Diaz of Beretta and Bourbon & Branch in San Francisco worked with mixologist Anthony Parks of San Francisco's Mourad and White Chapel to create Ettan's cocktail menu, which will include classic, "skinny" and zero-proof drinks. 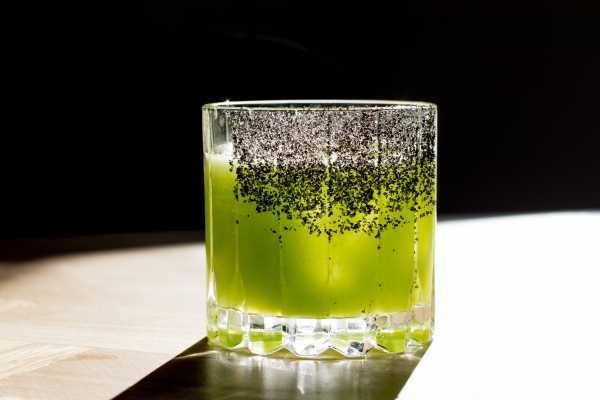 Sommelier Eric Railsback of Verve Wine in San Francisco and New York developed the wine list, which will focus on California and French wines. A reserve selection will include hard-to-find bottles sourced from private collections. The restaurant has also hired several servers with sommelier certificates, according to a press release.

Ettan will offer happy hour Tuesday through Friday from 5-6:30 p.m.

Thapar is the driving force behind the aesthetics of Ettan, which means "breath" in Sanskrit. She said she wanted to "create an iconic space for Silicon Valley ... but not in any way, shape or form (to be) intimidating."

On the mezzanine level is an art installation created specifically for Ettan: a massive rectangle of small wooden doors decorated with irreverent references to Indian life and culture. (Pictured below.) 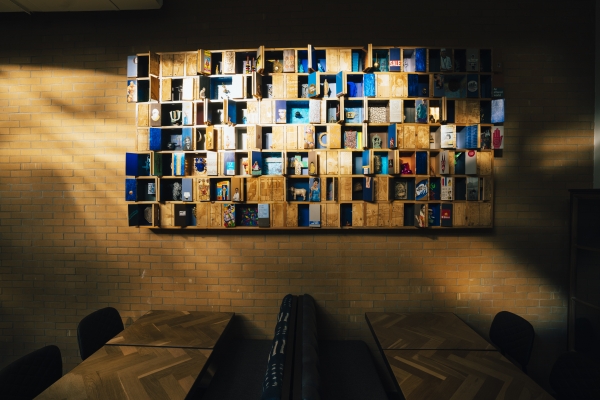 Framed large-format portraits of nomads in Gujarat, shot by Indian photographer Rohit Chawla, hang throughout the restaurant. Gautam Prashad's photographs of Delhi, Mumbai, Goa, Calcutta and other Indian cities decorate a stairwell into the basement (plus, those kamasutra-imposed shots).

By coincidence, Ettan is the second contemporary Indian restaurant to open in downtown Palo Alto in the last month. Rooh is serving live-fire food and modern dishes a few blocks away on University Avenue. 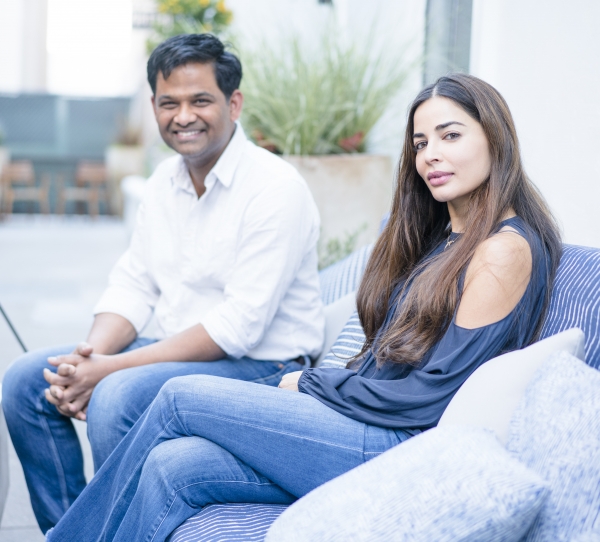 Despite Ettan's more causal bent, the possibility of a Michelin star is clearly on the minds of both owner and chef. Gopinathan said he's never run a kitchen with the express goal of earning the accolade but that "we would be pleased to have one, for sure."


That place has struggled with restaurants maybe because it is in the center of the block and somehow needs a presence from the street, but looking forward to trying it!