Like the first location in Italy and others in the U.S., what the company has dubbed Eataly Silicon Valley will house markets and counters offering imported Italian goods — cheese, olive oil, fresh and dry pasta, meats, produce, coffee, wine and the like — as well as restaurants, cafes and bars. 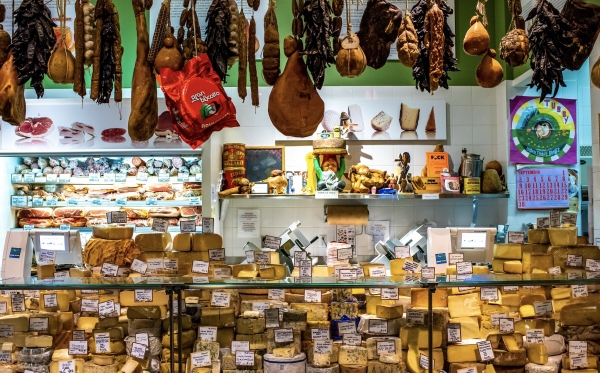 A cheese counter inside Eataly, which will open its first Bay Area location in 2021. Photo courtesy Eataly.

"We are excited to bring Eataly to one of the most important economic regions of the world in 2021," Global CEO Nicola Farinetti, whose father opened the first Eataly in Torino in 2007, said in an announcement. "At Eataly Silicon Valley, we will import many of our products from Italy — like olive oil and dry pasta — while also making it a priority to work with local producers from Northern California."

Eataly's philosophy is to give people a place where they "can eat, shop and learn, all about high-quality food" under one roof, "three activities that don't coexist anywhere else," founder Oscar Farinetti says on the Eataly website.

The two-story Los Angeles Eataly, for example, has three restaurants, nine take-away counters and two cafes and also offers cooking classes, such as how to make pasta and pizza.

The first Northern California Eataly will open as part of a $1.1 billion renovation at the mall, which stretches across the border of Santa Clara into San Jose. The overhaul will allow for 100 new restaurants and stores, according to media reports.

Since Farinetti opened the first Eataly in Italy, the company has expanded across the world. There are now 40 stores globally, including a flagship U.S. location in New York City and one in Los Angeles.

Eataly came under fire recently when celebrity chef Mario Batali, who helped open the Italian marketplace in New York City and sold his branded products at the stores, was accused of sexual misconduct. Nearly two years later, Eataly formally cut ties with Batali, purchasing his minority interest in the company.

This is indeed good news. Now all we need is Jose Andrés Spanish food hall like he just opened in NYC and we'd be all set


This sounds seriously amazing. I cannot wait to try!