Taishoken specializes in tsukemen, chilled noodles dipped in a separate bowl of warm broth. Owner Yoshihiro Sakaguchi is related to Kazuo Yamagishi, who is believed to have created the tsukemen style of ramen.
Sakaguchi's grandfather, Masayasu Sakaguchi, also co-founded Taishoken in Japan in 1951. 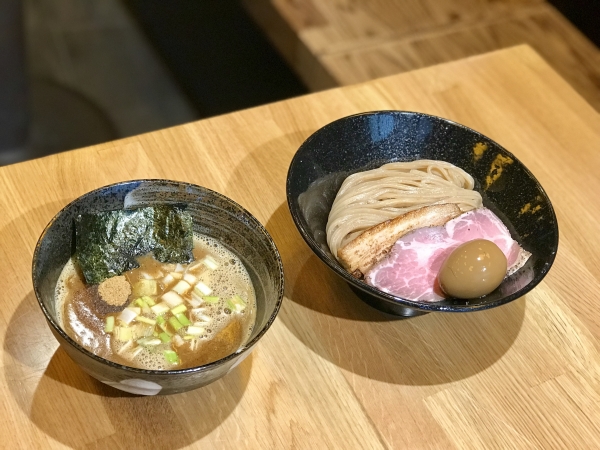 The thick noodles, made fresh with buckwheat, are cooked to a chewy but firm al-dente texture, then rinsed in cold water and folded into bowls for serving. You can add slices of sous-vide Berkshire pork chashu, pork belly charred with a blowtorch, green onions, bamboo shoots and marinated egg, among other toppings.

The menu instructs the uninitiated in how to properly eat tsukemen: First, taste the noodles by themselves, then dip them into the broth. "DO NOT POUR THE SOUP on to the noodles as it will dilute the soup," the menu admonishes.

When you're done with the noodles, you can order a side of soup wari, a dashi broth, for $1 to add to the remaining dipping broth as a palate cleanser. The combination of ingredients in the dashi broth -- glutamate acid from kelp, guanylic acid from shiitake mushrooms and inosinic acid from dried bonito flakes -- "will spread in your mouth and leave a great aftertaste," the menu reads.

While tsukemen is the main event, Taishoken also serves several kinds of ramen, including tokusei ramen with a soft-boiled egg and chashu, spicy ramen made with two kinds of chili oil and vegan yuzu-shio ramen (the broth is made from kelp and shiitake mushrooms). The kitchen uses a thinner housemade noodle for the ramen. 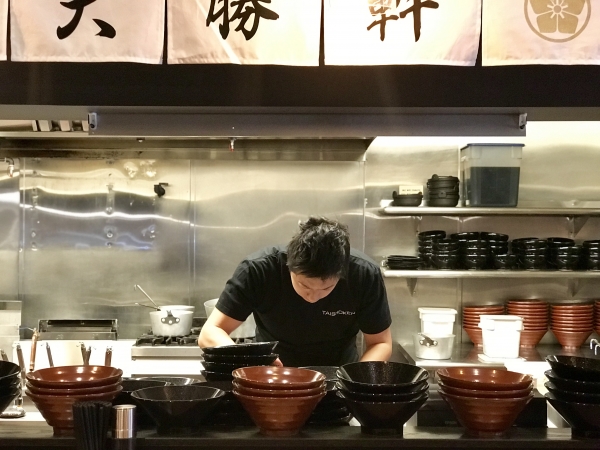 Yoshihiro Sakaguchi focuses intently on assembling ramen inside the open kitchen at Taishoken in San Mateo. Photo by Elena Kadvany.

Sakaguchi started working at an Italian restaurant in Tokyo after a post-college backpacking trip that took him abroad. He went on to cook at Mensho Tokyo in Japan for three years, then spent three years at the popular ramen company's San Francisco location before branching out on his own with Taishoken.

Sakaguchi said in a previous interview that he was drawn to San Mateo because of the city's Japanese culinary culture. He's neighbors with many of San Mateo's well-known ramen shops. Taishoken is also one of several prominent Japanese ramen chains to expand to the Bay Area in recent years, including Mensho, Ramen Nagi and Ippudo. Afuri Ramen + Dumpling is also set to open in Cupertino this summer.

Report Objectionable Content
+   2 people like this
Posted by Noodles Dishes Are Overpriced, a resident of Los Altos,
on Jul 11, 2019 at 6:16 am


Isn't paying $11.00+ for a bowl of noodles kind of expensive when you can simply buy a pack of Top Ramen for around a quarter & then toss some leftovers into it?

Actually, any menu item involving noodles (i.e. Pho, pasta etc.) should be priced under $10.00 as the cost of the added ingredients is minimal.

What I will remember about Ruth Bader Ginsburg
By Diana Diamond | 5 comments | 1,968 views