Verve Coffee to start brewing in Palo Alto this Friday

This cafe -- Verve's 12th overall -- has been a long time coming for co-founders Colby Barr and Ryan O'Donovan. They signed the lease for 162 University Ave. nearly two years ago, in August 2017, and before that had been casually looking for a space in Palo Alto for years. 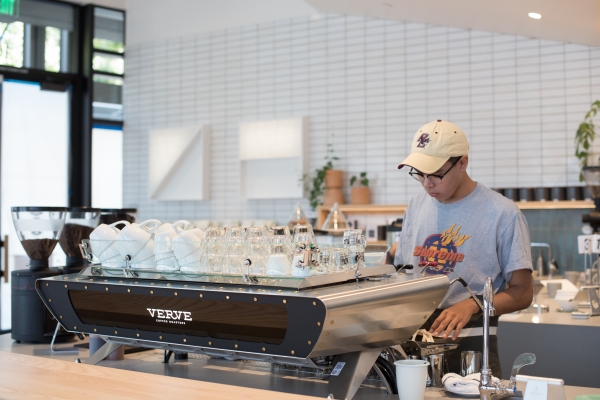 Inside the new Verve Coffee in downtown Palo Alto. Photo by Sinead Chang.

Verve's coffee is sourced directly from farmers all over the world and roasted in Santa Cruz.

The new Palo Alto cafe will have all of the company's typical coffee offerings, plus one new one -- Verve's take on cold brew, dubbed flash brew. Instead of steeping coffee for hours in cold water, they use heat to brew the coffee, as it is meant to be made, said Barr, and then flash chill and infuse it with nitrogen. The result is "super clean, bright, fresh tasting" cold brew, he said. Verve plans to test out new flavors of flash brew at the Palo Alto cafe before they're rolled out elsewhere.

Verve's founders are nearly as passionate about design as they are coffee. The light-filled, 1,400-square-foot Palo Alto cafe is meant to evoke an Eichler home, with floor-to-ceiling windows, an open floor plan, angular lines and flow between inside and outside. The Mid-century design look was already their aesthetic, Barr said, but they amped up in Eichler-filled Palo Alto.

Floor-to-ceiling windows fill the Palo Alto cafe with natural light. On the back wall hangs a white macrame "circuit board" by San Francisco artist Windy Chien, made from cotton and polypropylene rope. Photo by Sinead Chang.

Doors and large sliding windows open onto a 2,900-square-foot patio outside at the corner of University Avenue and High Street, which has been completely redone. When it's finished in a few weeks, there will be more than 80 seats under olive trees and a wood trellis.

Verve has a long-running partnership with Manresa Bread Manresa Bread, the bakery spinoff of the Michelin-starred Manresa Restaurant in Los Gatos, so look for croissants, chocolate-walnut cookies, kale-Parmesan scones and biscuits, among other baked goods. (Manresa chef-owner David Kinch has frequented one of Verve's Santa Cruz cafes for years, Barr said, and Manresa Bread head baker Avery Ruzicka was once a Verve barista.)

Verve uses the bakery's bread for its toast and sandwiches. The food menu includes avocado toast, chia seed pudding, steel cut oats and a breakfast sandwich on a brioche bun with egg, cheddar cheese and prosciutto. Food is served daily from 7 a.m. to 2 p.m.

Verve started with one cafe in Santa Cruz in 2007 and has since expanded to San Francisco, Los Angeles and Japan. The company is opening a new 8,000-square-foot roastery in Los Angeles this summer. 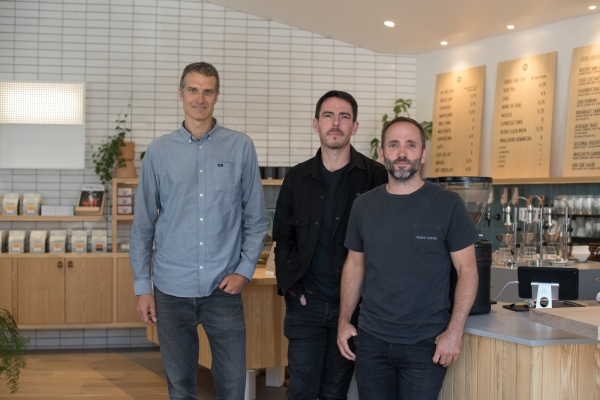 Hmm .. YACC, Yet Another Coffe Café.


Coffee shops thrive because they are places to hang out in, socialize, and get a drink. I won't be surprised if a coffee shop dispensing $3+ beverages does not do financially better than a shop selling antiques, trinkets or boutique clothing.


Will they of tea?
it looks nice.


I am all for as many cafes as possible ... I like that in Europe.
I just wish people socialized more in them, rather than staring into their laptops.

coffee shops should also offer varieties of high-grade marijuana like in amsterdam.

what is wrong with palo alto? too uptight?


> what is wrong with palo alto? too uptight?

PA is full of potheads. They just don't want certain others to know.

A lot of alcoholics as well.

Report Objectionable Content
+   5 people like this
Posted by charles reilly, a resident of another community,
on Jun 22, 2019 at 3:10 am

I'm happy to see as many independent coffee shops as possible . Good luck to Verve!

We will be back-

As least try it... once :) you may be surprised