A brief sign appeared in the windows of the 2435 Ash St. stating the business is "no longer in service." The owner could not be reached for comment. 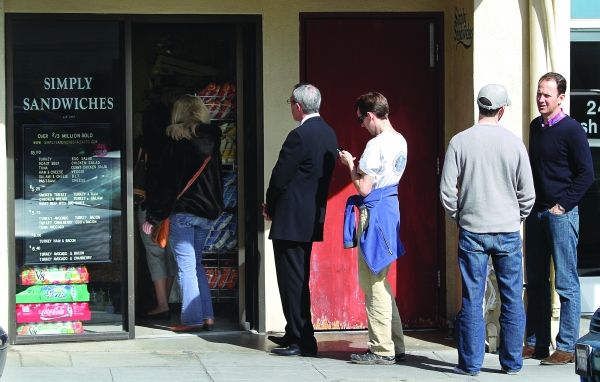 Customers wait in line outside of Simply Sandwiches in 2012. Photo by Veronica Weber.

Sand Hill Property Company owns the building Simply Sandwiches was located in at the corner of California and Ash Street, where the Hotel California is. Matt Larson, director of public affairs for Sand Hill, said the Simply Sandwiches owner informed the company "earlier in February that they intended to leave. The shop closed its doors at the end of last month." The owner had been on a month-to-month lease, Larson said.

The longtime, original owners of the 250-square-foot sandwich shop, Rob and Jeannie Wimmel, sold the business and retired in 2014. They bought the shop from friends in 1985, when each of the menu's five sandwiches cost $2.25. The current menu offered sandwiches in the $5.99 to $7.99 range. 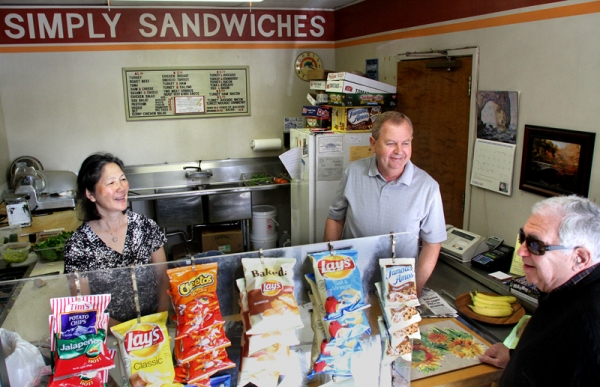 Rob and Jeannie Wimmell talk with Len Chaban on Feb. 21, 2012. Chaban had been a Simply Sandwiches customer since 1985. Photo by Veronica Weber.

Simply Sandwiches is the third business to close at that building, following Palo Alto Baking Co. in December and Cigar House last spring.

A dry cleaner and dog grooming company remain in the building.

Rebecca White is a registered user.

Report Objectionable Content
Posted by jh, a resident of Evergreen Park,
on Mar 14, 2019 at 12:08 pm
jh is a registered user.


"Matt Larson, director of public affairs for Sand Hill, said the Simply Sandwiches owner informed the company "earlier in February that they intended to leave."

Sounds like for PR reasons SandHill raised the rent to force them to leave without the bad publicity of evicting them.

Report Objectionable Content
Posted by Greedy JH, a resident of Community Center,
on Mar 14, 2019 at 2:43 pm


“Sounds like for PR reasons SandHill raised the rent to force them to leave without the bad publicity of evicting them."

Sounds like Jh is part of the Palo Alto branch of “lets bash greedy landlords".
The shop was on a month to month lease. They decided to close up shop. Unless you have proof of the landlord raising the rent so that they leave I suggest you provide it now.

Report Objectionable Content
Posted by CrescentParkAnon., a resident of Crescent Park,
on Mar 14, 2019 at 10:20 pm

I'm sorry I never knew about this place. Sorry I missed trying it out.

Sounds like a nice affordable place to eat ... of course Sand Hill had to shut it down. Maybe all negativity directed at Sand Hill cannot be proven, but there is a reason this company's name keeps showing up over and over and over again associated with profiteering and bad faith performance. I have to wonder who weigh in here to defend corporations that have these negative associations, and it is usually paid PR people trying to put lipstick on pig.

Report Objectionable Content
Posted by Prove sand hill lied, a resident of Embarcadero Oaks/Leland,
on Mar 15, 2019 at 12:06 am


CPA- go back and read the story- the owner decided to leave. Sand hill did not “shut it down".
And unless you have proof that mr. Larson is lying , I suggest you stick to facts. I know that in PA is okay to disparage landlords, developers, property management companies that dare to not go along with your myopic, selfish view of what Palo Alto should be, but that shtick is getting old and tired


Sadly for me, was just in a lousy spot.
Midtown would have been there twice a week....
But they also have a subway.
Was just like the Sandwich A Go Go at UC Berkeley 1970s-80s.
III

Report Objectionable Content
Posted by Annette, a resident of College Terrace,
on Mar 15, 2019 at 7:32 am
Annette is a registered user.

There's an opportunity in the closure of both markets for the new Khoury's Market. If they were to add an excellent bakery (ala the PA Baking Co model) and a quick option to get a good sandwich (ala the Simply Sandwiches model) I think they would find themselves a happy new customer base.

Report Objectionable Content
Posted by Annette, a resident of College Terrace,
on Mar 15, 2019 at 7:33 am
Annette is a registered user.


Oops - sorry - make that closure of "businesses" not stores.

Report Objectionable Content
Posted by jh, a resident of Evergreen Park,
on Mar 15, 2019 at 5:51 pm
jh is a registered user.


"go back and read the story- the owner decided to leave"

Might be that the owner "decided to leave" because their rent was raised.

Report Objectionable Content
Posted by CrescentParkAnon., a resident of Crescent Park,
on Mar 18, 2019 at 12:16 pm


"Prove sand hill lied" ... No, you prove they told the truth?
I know what the story said.
With the proliferation or no-tell clauses and pay-offs who can know? You? Dubious.
To say that finances had nothing to do with the proprietors deciding to "call it quits" is really dishonest of you.

Report Objectionable Content
Posted by Anon, a resident of Another Palo Alto neighborhood,
on Mar 19, 2019 at 10:34 am


JH, et al.: You seem to have missed the opening sentence:

"Affordable." Of course they closed-- they were "affordable". Just another casualty. Why assume that Sand Hill went out of their way to close them-- every affordable business or service is either leaving town or going more "upscale". Another side effect of the "vibrancy we all want".