Poke House has replaced pokéLOVE at Town & Country Village in Palo Alto. pokéLOVE closed toward the end of 2018, with a sign posted in the restaurant's window stating it was for a remodel and that the restaurant would reopen soon. pokéLOVE had operated there since the summer of 2016, when fast-casual poke started to take the Bay Area by storm.

James Deng, the owner of Poke House, said he was looking to expand to Palo Alto and thought Town & Country "would be the perfect spot." He made an offer to the owners of pokéLOVE, who eventually sold after about a year of negotiations, Deng said. 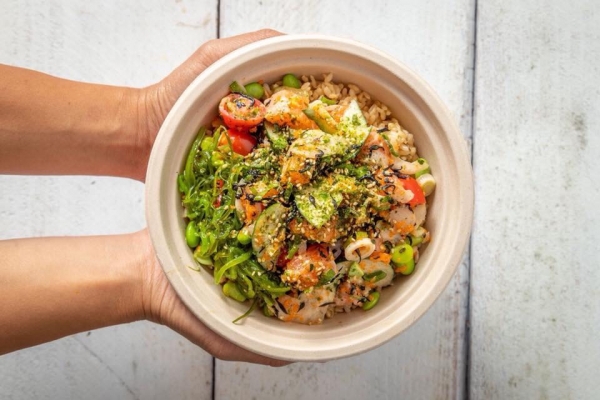 Poke House soft opened this month and will hold a grand opening on Sunday, Jan. 27.

Deng, a Bay Area native, opened the first Poke House in San Jose in 2016. Palo Alto marks his fifth location, with plans to expand to Santa Cruz, Monterey and Belmont by the end of the year.

Deng said he worked in restaurants until going to business school and transitioning into the technology industry. He quit a job working with large film studios in Southern California to pursue his idea for a poke restaurant full time.

The Poke House menu is similar to its many competitors', with options to order a pre-set poke bowl or to create your own from different bases, proteins (seafood, meat and tofu), dressings and toppings. The house salmon bowl, for example, comes with salmon, masago, edamame, cucumber, white and green onion, furikake, seaweed salad and crab salad, topped with sriracha aioli and ponzu. There are also handrolls and salmon and tofu chazuke.

"We don't have a freezer here in our stores because we believe our food should be eaten as fresh as possible, not frozen or canned," he said, adding that vegetables are also locally sourced.

Poke House is located at Building 1 at the 855 El Camino Real shopping center.

We are always suspicious of these "poke" restaurants where the menu emphasizes the vegetables instead of the fish. If you order poke in Hawaii, the fish is always the main attraction. Salad or rice side dishes are always optional. Fortunately, Hawaiian-style poke restaurants are starting to appear in the Bay Area (Sam Choys in San Bruno and Aloha Fresh in Cupertino).

We need an audit of city spending
By Diana Diamond | 7 comments | 1,945 views