View all posts from Diana Diamond

Gobbledygook goings on in Palo Alto

Uploaded: Dec 7, 2018
We all know the local governments at times try to hide things, despite their loud proclamations of how transparent they always are. But the opaqueness continues.

A marvelous case in Palo Alto is the last agenda item for the Monday, Dec. 10 council meeting.

Title: PUBLIC HEARING: Adoption of an Ordinance Amending Section 18.18.120 (Grandfathered Uses and Facilities) of Chapter 18.18 (Downtown Commercial District) of Title 18 (Zoning) of the Palo Alto Municipal Code (PAMC) to Adjust Regulations Relating to Noncomplying Facilities. California Environmental Equality Act ( CEQA), This Ordinance is Within the Scope of the Comprehensive Plan Environmental Impact Report (EIR) Certified and Adopted on November 13, 2017 by Council Resolution No. 9720; Alternatively, the Ordinance is Exempt From Environmental Review Under CEQA Guidelines Section 15061(b)(3) (Continued From December 3, 2018)
From: City Manager
Lead Department: Planning and Community Environment

Would you ever believe that this gobbledygook really means the subject of the agenda is giving A.J. Capital the right to turn the President Hotel into a boutique hotel? The old building has provided low-cost rentals for some Palo Alto residents for years, and the “renovation” has been met by many people objecting who say the affordable housing the site provided is more important than a new hotel.

As the Palo Alto Weekly editorial pointed out so well this week, this incomprehensible agenda item is a way for staff to cover up giving A.J. Capital the zoning changes it wants to convert the hotel, and also hide from the public what is actually going on. Did City Manage Jim Keene and Mayor Liz Kniss approve of this agenda item, as written, as most managers and mayors usually do? Is this deliberate obfuscation? I can only conclude it must be.

Isn’t this slightly akin to the public finding out recently that Chief Information Officer Jonathan Reichental spent 114 days during the last four years on corporate paid room-and-board-and air junkets to Europe and Asia to speak about what he has done? I divided 114 by 4 years and came to an average of 28 days a year spent on these trips to faraway places. Reichental said he was not paid for them (by the corporations, but also by the city)? Are other city staffers allowed to take 28 days a year away from their desks for invitational speeches? Just wondering. Maybe I’m jealous. I’ve worked for several different companies, none of which said to me, go spend five weeks traveling around to talk to people, and by the way, don’t forget to take your three weeks vacation. Reichental did announce shortly after the news of his travel broke that he has accepted a job with Oracle, and said he told Keene about his job search a couple of months ago.

I’m glad Keene decided days before he is retiring not to take a salary raise for this year, retroactive to July 1. So decent of him? Or was he just avoiding a bevy of resident complaints if he accepted the increase. I mean he has gotten a fairly decent salary, I think – $313,477 in salary and $152,302 in benefits this past fiscal year, bringing him to a total of $465,780. His raise that he rejected would have brought his salary up to $327,692, plus benefits . Don’t forget, Keene will get a lifetime pension and benefits (including health care for him and his spouse) of about 85 to 90 percent of his salary, with cost-of-living increases. I could live on that.

Not many of us get pensions any more, except government employees. Most of private industry now relies on 401-Ks and other plans. Yet city employees on the Peninsula keep on getting salary increases each year, not based on merit or jobs well done, but simply on coming to work. The cost-of-living has remained relatively stable in this country the past few years, yet public employee salaries keep on going up and up. And it’s become a game – if one city raises salaries, other cities are told they will not be competitive in hiring employees (or the ones they have will leave) if they don’t keep up with the increases. And we all seem to quietly accept this salary-increasing con game cities play.


Los Altos too has the same problem. E.g., it used to require 15000 sq ft lots to permit an ADU. Residents were fine with reducing it to 13K, 12K, even 10K. The City posted a notice June 2018 re: an agenda item at the upcoming Council meeting "to consider reducing the lot size required to establish an ADU."

Guess what Council did? By a 4-1 vote, they flat out *eliminated* the lot size requirement! Also eliminated: side setbacks, owner occupancy. In effect they have the City into a hunting ground for developers to buy properties, build ADUs on side property lines, rent out the master and ADU, with cars parked on the streets. City staff and the Mayor's stated-on-the-record pretexts for these drastic changes? "State Law has tied our hands...we have no option..." which is baloney and gobbledygook combined together as State makes no such requirement and no other City has taken these steps.

Mayor Mordo got kicked out in Nov elections.
He, the City, staff etc are defendants in the Federal and State Courts...and lacking a good explanation that makes sense to judge and jury, face liability that is sky-high.

Report Objectionable Content
+   12 people like this
Posted by Online Name, a resident of Embarcadero Oaks/Leland,
on Dec 9, 2018 at 6:19 pm
Online Name is a registered user.


I don;t think it was just Mr. Keene's decision to forgo the raise since I just got a letter from Mr. Tanaka's office thanking me for my email objecting to the proposed raise for Mr. Keene saying:

"The amount of emails written to council regarding the raise was instrumental in influencing the final decision made by the council.

I would like to bring your attention to another similar topic that is coming to council tomorrow. City staff has reached a Memorandum of Agreement with UMPAPA (Utilities Management and Professional Association of Palo Alto). UMPAPA consists of 48 budgeted full-time positions, covering all supervisory and management level classifications within the Utilities Department. The main point in this agreement is as follows: A 12% base salary increase for all members of UMPAPA (total cost to the city: $1.14 million). Just for reference, the current percent increase the City gives to its employees every year is 3.1%."


Thank you for your "spot on" article.

I hope you were listening to the CC's 12/10 meeting and discussion of the above "gobbledygook". Public speakers were incensed! Some were more elegant and restrained in their comments than others, but all spoke the truth. Sorry if it was uncomfortable for some to hear.

It will be interesting to see the annual Residents Satisfaction with City Government Survey results in Jan., 2019. I am predicting another decline in residents' satisfaction given what has occurred in City Hall this past year.

I am hopeful the new CC will address issues with transparency and open discussion. This City is filled with intelligent people willing to help solve the City's problems. Limiting their comments to 1-2 minutes at the podium is not acceptable. Residents need to be informed and allowed to question City staff; staff are paid by taxes and are stated to work for Palo Alto's best interest. This definition to most does not include "special interests". Backroom "deals" and opaque transactions will continue to attract voter interest and be called out when appropriate.

I thank everyone who has worked to shine a light on these issues. Good job!


Kind of reminds me of the old song "doo doo do, dah dah dah, that's all I want to say to you."
Pretty soon government meetings will be run the way cafes run, with distracting background music. Or psy ops.

Report Objectionable Content
+   3 people like this
Posted by Corruption begins at the top, a resident of Crescent Park,
on Dec 13, 2018 at 3:15 pm


It begins at the top and can be controlled by the top.
We can hope that the new City Manager isn't as untrustworthy as the current one.

The Gobbledygook planning documents don't have to be so unreadable. Complex documents can be well-written so as to be readable by educated people, it does take work though. And the desire to be clear.


It begins at the top and can be controlled by the top.
We can hope that the new City Manager isn't as untrustworthy as the current one.

Get the day's top headlines from Mountain View Online sent to your inbox. 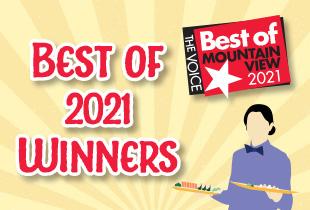 To show appreciation for the local business community, readers voted for their favorite places to eat, shop, work out or spend time with family and friends. The Mountain View Voice is proud to unveil this year's Best Of honorees.