In fact, every dish comes in three. Order French fries and you'll get truffle, garlic and sweet potato. Meatballs? Look for a plate of Swedish lingonberries, Italian marinara and pineapple teriyaki meatballs. Want a martini to chase it all down? Expect one cucumber, one Gibson and one dirty. 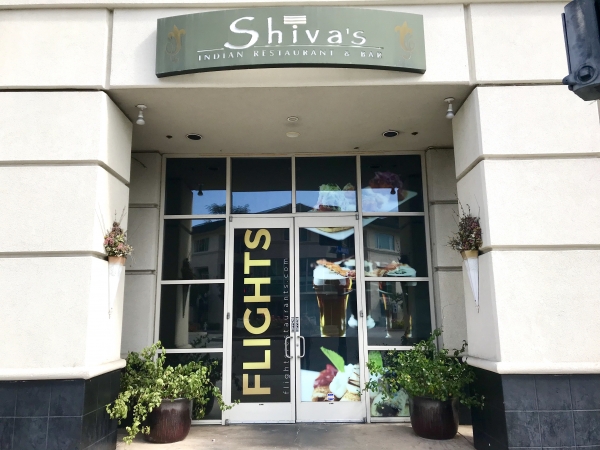 Flights will open this fall at the corner of California and Castro streets in Mountain View. Photo by Elena Kadvany.

Hult is a former professional hockey and poker player from Sweden, where his mother ran several restaurants. He opened his first restaurant in 2013: Hult's Restaurant, which served upscale Swedish-California cuisine. He closed Hult's and turned it into a Flights restaurant earlier this year.

At Hult's, he noticed more and more customers sharing appetizers as their meals rather than entrees. This, combined with his own observations of our increasingly busy lives and an alluring cocktail flight on his honeymoon in Hawaii, gelled into the idea for a restaurant that would encourage a shared experience.

"Basically it's a gimmicky thing that gives people a reason to talk to each other and laugh about it," Hurt said. "It creates a reaction. It forces people to interact with each other."

At Flights, everything comes as three appetizer-sized servings. "Order one get all three," the menu reads. 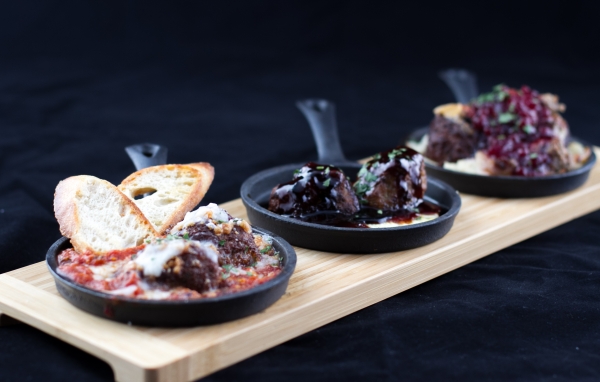 The Mountain View restaurant will have the same menu as the other locations.

Hult hopes to be open in Mountain View by late September.

He's also negotiating to open inside a hotel on the Las Vegas strip and said he plans to turn Flights into a national franchise, with locations in major cities and airports.


The Mall-ification of Castro St continues.... thanks to idiotic decisions by our city council


Haters must hate, they must voice some perceived negative whether it actually exists or not, and even if it just comes out as some misguided "Pshhh...gubment" type post. It's a bit like turrets.


Really hard to believe that he can pay downtown Mountain View rent for this huge space with a menu of "hot dogs, pizza, tacos, grilled cheese, salads, sliders".


We have eaten at the Los Gatos location and were not impressed.
The food was only so-so and the service was totally lacking.
We enjoyed the "Hults" Restaurant before this change was made
and we are not interested in "Flights" in the least.


Beignets? I'm in. Of course, there won't have the atmosphere of Cafe du Monde in New Orleans, but I love beignets!


Novelera, you took for granted that this restaurant uses the word beignet in the special, slightly confusing way New Orleans does (for what the rest of the US originally called a drop cake or dough nut -- before the circle shape became popular for "dough nuts"). But the restaurant's founder came from Europe. The basic meaning of beignet in French cooking is a fritter (aka tempura), that's how the word is used worldwide (and in French cooking and cookbooks even in the US). So in this situation it could mean either.

Besides which, I don't get what is so special about doughnuts that happen to be cooked in a different shape (and I've tried them in New Orleans, many times), it almost implies an obsession for sheer novelty.


@Eater: Do you even hear yourself? You sound so arrogant. You must be a blast at parties- "This chip, which I have tried many times you know, would be called a crisp elsewhere. How do you people enjoy these!?"

Lots of cultures have their preferred version of fried dough. Get over it.


Something new to try. Shivas was fine. It was ... there. Decent enough Indian food but with a host staff that seemed generally annoyed to assist you. I gave up after the second time. Some people may not like change, but the new place at least sounds different than the same old thing.


@Ron: Do you know that online written communication misses many of the cues that help people understand each other in person? So it is common for readers to project their own assumptions about motive, tone, etc. when they read something online, and then respond to those projections. It's how flame wars usually start.

There is a sort of petty snobbery about New Orleans beignets. Petty, because some people boast they've been to New Orleans to get them, but don't know that when Americans understand the word at all, they can understand it in two different meanings. So, at parties in fact, I've heard people do that, hold forth about beignets at Café-du-Monde (always Café-du-Monde, the tourist place, never anywhere else in New Orleans). Then other Americans ask what those beignets were filled with, but the first people don't understand the question. Sorry if a little clarification was unwelcome.

Report Objectionable Content
+   2 people like this
Posted by Nope, not helping the cause, a resident of Another Mountain View Neighborhood,
on Jul 23, 2018 at 2:05 pm


Should have quit while behind instead of reinforcing Ron's opinion.


No, the last troll comment is off-target, again. I had no expectation of influencing Ron's opinion, or any like it. Just as the opinions of negative commenters to this blog (who habitually disdain businesses they've never tried) are unlikely to be influenced by facts. There's ambiguity in the word "beignet" today, and the Louisiana variant is a hyped form of doughnut. If Ron, or "Nope, ..." or the cryptic other troll who was deleted (if all those are even more than one person) has a problem with those facts, or chooses to read them in some jaundiced way, the problem is strictly theirs.

Where is it unsafe to bike around town?
By Sherry Listgarten | 39 comments | 1,976 views

An extra helping: Local restaurants unite for two days of fundraising for AAPI group
By The Peninsula Foodist | 0 comments | 1,655 views