Black Pepper soft opened last week in the former Menlo Hub space, which closed in 2014 after the owner went into debt.

Owner Kay Tan also operates Banana Leaf in Milpitas. The menu at Black Pepper is similar, with a range of Malaysian as well as Thai, Indian and Chinese dishes. Appetizers include roti prata ($4, made from scratch, Tan said in an interview), chicken satay ($16) and gado gado ($14, an Indonesian salad with jicama root, lettuce, cucumber, fried prawn cake, seared tofu and peanut sauce), among others. 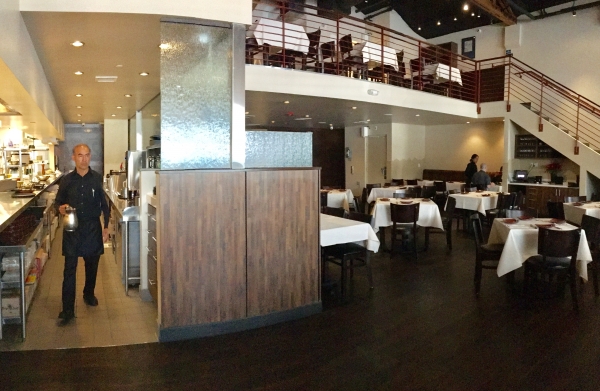 Entrees include a range of meat and seafood dishes, from Singaporean black pepper chicken ($18) to cumin lamb chops ($28) and grilled Chilean sea bass wrapped in banana leaf ($36). There are also several noodle and rice dishes.

"This is the type of food I grew up eating," Tan said.

Tan said the menu will grow as the restaurant settles in, with new items that aren't available at Banana Leaf, she said.

With a full liquor license, there's also a cocktail menu with drinks like the "Mai-laysian Coco Rummy Tai (rum, lime, pineapple juice, peach syrup and coconut palm syrup) and the "Tequila Mangga" (tequila, mango, lime, rambutan and mango juice). All are $12 each. 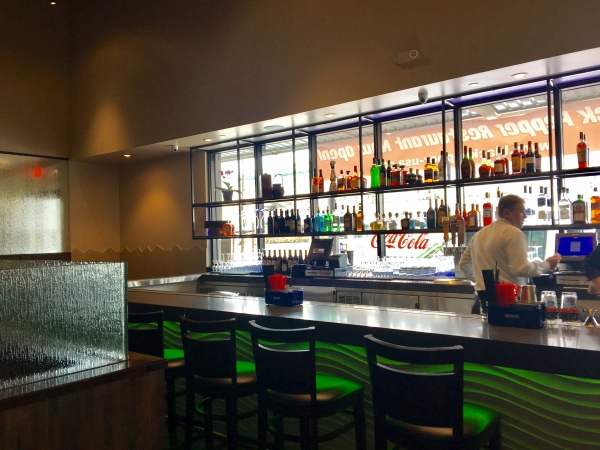 The new, full bar inside Black Pepper in Menlo Park.

Tan came to the United States from Malaysia after high school and said she worked in restaurants and bars in San Francisco and throughout Peninsula while she attended college at San Francisco State University. After graduating, she worked in marketing and sales at a technology company, but eventually left it to pursue her "dream" of owning a restaurant. She opened Banana Leaf with her husband 18 years ago.

The El Camino Real space has been renovated, with a full bar, second-floor seating area and large open kitchen. The restaurant ran into some roadblocks with the city when it proposed a larger footprint for the space more than a year ago.

Black Pepper is the latest newcomer to the usually sleepy Menlo Park restaurant scene, following on the heels of the revamped British Banker's Club, which reopened across the street in late December, and Yum Cha Palace, which took over the long-empty Su Hong space next door.

Tamarine, the established standard bearer for Asian fine dining in Palo Alto, has no entrees over $34.

Banana Leaf may be super popular (no idea why, really), but with higher prices like this Black Pepper is DOA.

Report Objectionable Content
Posted by FromMenlopark, a resident of Menlo Park,
on Mar 15, 2017 at 5:55 pm


How much do you think that fish is paying for rent in Menlo park?

I was so excited to hear that this restaurant was opening and had full intentions of going... until I saw their prices. Eeek!

It's expensive, even for Palo Alto/Menlo Park.

Report Objectionable Content
Posted by Yikes, a resident of Duveneck/St. Francis,
on Mar 15, 2017 at 9:07 pm


I love Banana Leaf, but the price point at Black Pepper is much higher for the same dishes! Sorry, not sure I will be dining here.

Report Objectionable Content
Posted by Zeekay, a resident of Downtown North,
on Mar 15, 2017 at 10:49 pm


Prices are fair for Palo Alto and Menlo Park. I would like to try this local restaurant and support their business. Tired of mediocre food from chain restaurants!

Report Objectionable Content
Posted by 1to2monthsandgone, a resident of Menlo Park: other,
on Mar 19, 2017 at 12:05 pm


Thank you to the Black Pepper owners and team for coming to Menlo Park. We are glad you are here and wish you luck. Nice to see a new restaurant in an empty space. Along with BBC we have some new energy on the dining scene. To the MP naysayers, yes, prices have to align with demand, etc. That is natural and really based on market forces. Our family likes reasonable prices but, for starters, we like new choices. Change is afoot in MP and thus far it is positive so lets be supportive to business owners who choose us.


Report Objectionable Content
Posted by aria, a resident of Green Acres,
on Mar 21, 2017 at 3:52 am
aria is a registered user.


Costs are reasonable for Palo Alto and Menlo Park. I might want to attempt this neighborhood eatery and bolster their business. Thanks.
[Portion of post removed.]

Report Objectionable Content
Posted by Value in comparison, a resident of Another Mountain View Neighborhood,
on Mar 21, 2017 at 6:05 am


Cost are unreasonable for cities that are a 3 minute drive away, so yah...enjoy these "Fair for PA/MPO prices." Some people need to buy expensive things just so they "feel" wealthy to themselves.
That's why people buy a 120.00 T-shirt at Neiman Marcus instead of the exact same shirt at Macy's for 30.00. They actually did a study on that sort of behavior.


I'm with those thoughtful commenters who'd like to at least TRY a new restaurant before judging if it's worth the price. (It's amazing to see demonstrated once again how a free-for-all comment forum brings out the minority of the population that second-guesses a new business from no experience of it, and posts dismissive conclusions. And even second-guesses further, to rationalize why not everyone reacts in that way. Why not just stick to Yelp, which was created to attract such comments?)

I've experienced some special-occasion restaurants way more expensive than their competition, yet worth every cent. And budget restaurants that were overpriced for what they did. Not all of life's experiences or values can be judged from the armchair.


@1to2monthsandgone, Black Pepper leases at lest 10-15 parking lots at the back of it's restaurant. Not many establishments do this.

I have tried Banana Leaf many times even though the drive is far, but food is amazing, owners very friendly and I look forward to having Black Pepper in MP.

Report Objectionable Content
Posted by pro menlo, a resident of Downtown North,
on Mar 23, 2017 at 8:27 pm


My first reaction was - $38 for chilean sea bass? but I was persuaded by the multiple people who pointed out how difficult it is to have a locally owned business succeed here so we gave it a shot, figuring we didn't have to order sea bass. Glad we did, the food was great! The kitchen got a bit behind as it was busy, but then the owner gave us a free desert - nice unexpected touch. Will definitely be back

Report Objectionable Content
Posted by Peninsula Foodie, a resident of Atherton: West of Alameda,
on Apr 20, 2017 at 2:24 pm


Just went yesterday. Loved it, and so glad that it is an option for a modern restaurant with quality ingredients and a very tasty menu! We loved everything we tried. And the service is very well-intended that will get better with time, and even if it doesn't, it is perfectly fine the way it is. As for prices, it's not much more than some of the restaurants in Palo Alto that we frequent, and I certainly prefer not having to drive to Palo Alto. We observed other diners who were enjoying dinner as much as we were. As for parking, it's as available as for the ubiquitous Left Bank, and unless one has physical challenges, I certainly don't mind a tiny walk from one of the other public parking areas if those specifically for the restaurant aren't available. When we were there last night at 6:30, we had plenty of choices. Definitely looking forward to returning to try more of the dishes.

Arya Steakhouse, a standby for steaks and Persian cuisine, moves to downtown Palo Alto
By The Peninsula Foodist | 0 comments | 3,128 views

We need an audit of city spending
By Diana Diamond | 3 comments | 1,415 views