Khan will open the new location at 365 California Ave., most recently the home of fast-casual chain Pizza Studio. Pizza Studio suddenly closed in January after about 15 months of operation.

Khan, who grew up in Karachi, Pakistan, decided to open another Zareen's not only because the very busy Mountain View restaurant is tiny — it seats only 15 inside — but also because it could be forced to close if the City of Mountain View approves LinkedIn's plans to build a massive 10-building campus at the Plymouth Drive site and surrounding area. Khan an wrote in an email that it's unclear when that might happen but that she "believe(s) they plan to tear down as soon as the city approves their plans for development there." 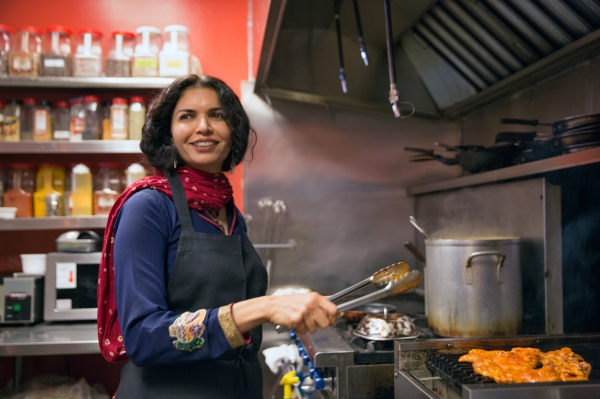 Zareen's serves traditional as well as more fusion-style Pakistani and Indian food, from samosas and kebabs to a Punjabi chicken burger with spicy fries. The Palo Alto restaurant will serve the same food, but more kitchen space will allow Khan to add more items to the menu, she said. View the existing menu here. 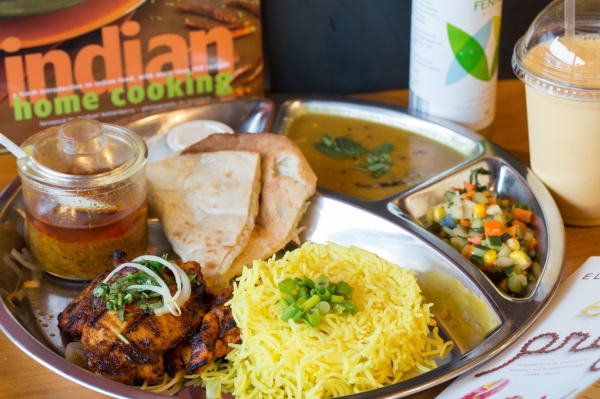 Khan is hoping to be open in Palo Alto within a month or two. Stay tuned for an opening date.

In the meantime, get to know the menu better by reading this 2014 review of the Mountain View restaurant: Luscious kebabs, delicate curries


Awesome, I hope they make Nihari !!!

Report Objectionable Content
+   5 people like this
Posted by Cliff Doxson, a resident of Downtown North,
on Jul 5, 2016 at 3:13 pm


I've eaten twice at the Mountain View location, both times for lunch (when it can be a little crowded given the size of the place), and I've enjoyed both occasions.

I had the chicken burger the first time (excellent), and the vegetarian paneer tikka masala the second time (really good.)

I'd wanted to try their weekend brunch specials, but never found myself in that part of MV on the weekends. So the opening of a new place up here in PA is nothing but good news.

I hope they can keep both going, but if they can't, I hope the PA location becomes a full-fledged dine-in/dine-out restaurant in short order.

Report Objectionable Content
+   7 people like this
Posted by john_alderman, a resident of Crescent Park,
on Jul 5, 2016 at 4:07 pm
john_alderman is a registered user.


So glad they're opening a larger restaurant. Their food is wonderful and the employees are welcoming and friendly as soon as you enter their current, tiny restaurant. What a great addition to California Avenue!

The penultimate paragraph states: "Khan is hoping to be open in Palo Alto within a month or two. Stay tuned for an opening date."

That means no one, not even the owner knows for sure.

Better for them to be fully prepared for the opening rather than bungling it because they rushed their preparation & training.

My guess is that the opening also depends on a health department inspection as well that hasn't happened yet.


What an excellent addition to California Ave, and a huge improvement over Pizza Studio!

Report Objectionable Content
+   4 people like this
Posted by john_alderman, a resident of Crescent Park,
on Jul 8, 2016 at 1:57 am
john_alderman is a registered user.


@ Reader - You also need to factor in the Palo Alto bureaucracy multiplier. Take a reasonable time estimate and add 6-8 months.

Report Objectionable Content
+   2 people like this
Posted by Reader, a resident of another community,
on Jul 8, 2016 at 7:45 am

Yes, you're right about the Palo Alto bureaucracy factor. I think she'd be lucky to open new her Palo Alto location in the first half of 2017.


Great to see new family-friendly restaurants coming to Palo Alto. Most of the new downtown restaurants are too loud, crowded, and expensive for families. Looking forward to trying this place.

Report Objectionable Content
+   2 people like this
Posted by SEA_SEELAM REDDY, a resident of College Terrace,
on Jul 9, 2016 at 3:55 pm
SEA_SEELAM REDDY is a registered user.


Looking forward to having a Pakistani restaurant.

Hope the prices are reasonable.

Hope they have good chicken kebob or keema with naan.


I ate Friday at Zareens, and was so excited to hear they would open on Cal Ave, blocks from my place. Their food is delicious. In my opinion. Palo Alto lacked really flavorful Induan food. They do have Nihari, @Saleha.


Oh do happy they are coming to Califirnia Ave. love their brunch menu. I hope they have their traditional breakfast menu in PA too.


We've eaten there a couple of times, food is great, ambiance & service excellent, plus each dish is specially prepared unlike most desi places where the same base curry is used for most dishes (have eaten at most Desi restaurants in South Bay and SF), highly reccomeded!!


I love their lamb curry. Best of all, its BYOB. Bring your bottle and use their wine glasses :)

Where is it unsafe to bike around town?
By Sherry Listgarten | 40 comments | 2,006 views

An extra helping: Local restaurants unite for two days of fundraising for AAPI group
By The Peninsula Foodist | 0 comments | 1,659 views