Gordon opened Gordon Biersch with Dean Biersch in 1988. They sold the Palo Alto outpost about 17 years ago, and the private equity firm that eventually took it over recently told Gordon that they were thinking about shutting it down, Gordon said. The firm had closed the San Francisco location a few years ago, too.

So he bought it back, partnered with Sincheck and they "poured our heart and souls into it — along with a lot of money — to make it something spectacular," he said. 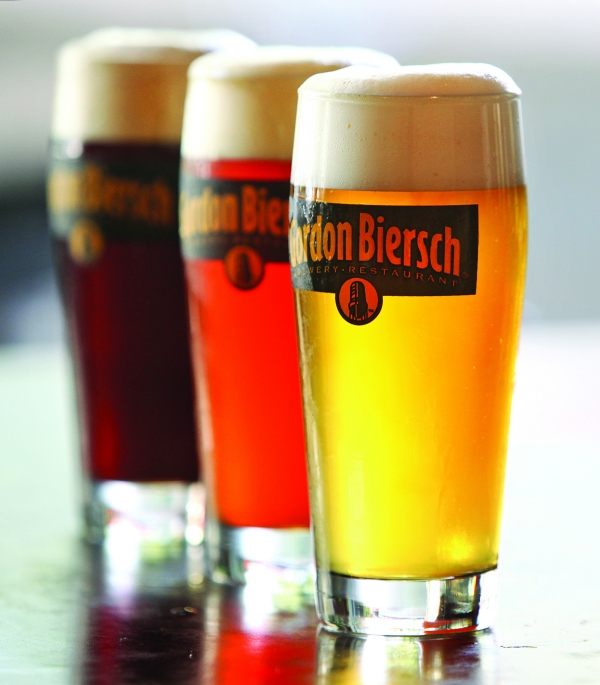 "WILDCIDE," a new hard cider Gordon makes from apples, California-produced wines and American whiskeys, will also be on tap.

They also "refocused the food on things that we felt would be extraordinary well-paired with beers," landing on barbecue. Armed with a 750-pound smoker, the kitchen is turning out everything from 18-hour smoked brisket and ribs to smoked chicken wings. Other dishes include fried Brussel sprouts, grilled artichoke, poutine, biscuits, grits, a pulled pork sandwich, salads and more.

Everything is "farm to table," Gordon said. The menu notes where some ingredients hailed from.

He said he and Sincheck plan to be very hands-on owners and will be in the new space often.

"It’s just fantastic going full circle, 28 years later to come back where everything started for Gordon Biersch," he said.

Today, there are more than 30 Gordon Biersch restaurants, some franchises, across the nation. The Palo Alto location was the first. The actual brewing and bottling facility is located in San Jose.

The new Dan Gordon's just opened for lunch this week. Hours are 11 a.m. to midnight, Sunday through Wednesday, and 11 a.m to 1 a.m. Thursday through Saturday.

Report Objectionable Content
+   16 people like this
Posted by Gale Johnson, a resident of Adobe-Meadow,
on Mar 24, 2016 at 4:32 pm
Gale Johnson is a registered user.


I must be getting old fast. Three decades? I can remember going there when they first opened. I liked looking at that brewing vat in the back. The cheeseburger and fries were great as was the beer. I might have to hobble down there again with my cane and try it out.

Report Objectionable Content
+   9 people like this
Posted by Observer, a resident of University South,
on Mar 25, 2016 at 8:40 am


The new restaurant is great! GB had been on a downhill track for the last five years - the old menu was large and most of it was mediocre at best. With the new menu, they did two things - bbq and beer - and they did them very well. My wife and I are going back for our next date night.

Note that the new space is loud and crowded, though - it's a brewpub, not fine dining.


I still consider it the Bijou Theater. So there,

Report Objectionable Content
+   3 people like this
Posted by Patron Patrone, a resident of Another Mountain View Neighborhood,
on Mar 28, 2016 at 5:17 pm


I always had good food there, back in the day especially. We stopped going downtown due to some family encounters with some of the problematic people you run into along Univ from time to time.
Anyway, we didn't stop going because of the food, and reading above, it may lure us back to the mean streets of downtown Palo Alto (haha).
Now I'm craving a BBQ cheeseburger.


Gordon Biersch (GB) sold 2 liters of GB beer (a growler refill) for about $12 a few years ago, at this location.

Now, Dan Gordon's sells the same 2 liters of the same GB beer for $25.


Report Objectionable Content
+   10 people like this
Posted by Not quite 'nuf, a resident of Another Mountain View Neighborhood,
on Mar 29, 2016 at 6:57 am


I am long term customer of GB. I was really sad when the SF restaurant closed. It would have been even sadder to see the Palo Alto one going as well. I am happy to see that Mr. Gordon decided to keep it alive... sometimes money is not the only pourpose of business and I am happy he protected his baby. I wish all the best of lucks to him and his partners and I will for sure be a loyal customer of the new Dan Gordon's restaurant. I am sure it is going to be even better than the great GB

Premarital and Couples: What Does Sex Mean to You?
By Chandrama Anderson | 1 comment | 1,068 views