Rumor has it Nobu is coming to Palo Alto

Uploaded: Mar 4, 2016
Famed restaurateur and chef Nobu Matsuhisa, who operates an empire of high-end Japanese restaurants across the globe, is rumored to be eyeing a new outpost in Palo Alto.

The San Francisco Chronicle reported the news Friday. Rumors have been swirling locally for a few weeks that Matsuhisa has partnered with none other than former Oracle CEO Larry Ellison to open a Nobu inside downtown Palo Alto’s Epiphany Hotel, which Ellison bought in 2015.

Sources confirmed today that the Nobu team is looking at restaurant spaces in Palo Alto and the Epiphany is one potential option. No word on what would become of the hotel’s current restaurant, Lure + Till, if that happened. 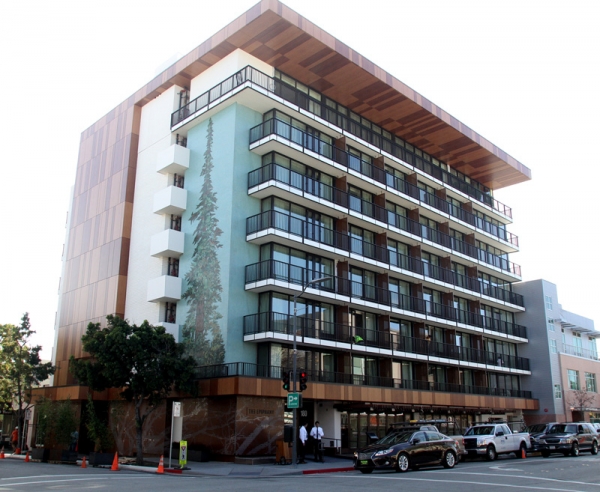 Rumor has it Nobu is eyeing a new location at the Epiphany Hotel on Hamilton Avenue in downtown Palo Alto. Photo by Veronica Weber/Palo Alto Weekly.

"The official response is 'no comment,'" Leah Goldstein of Leah Goldstein Public Relations Inc. wrote on behalf of the Epiphany Hotel in an email to the Weekly.

This wouldn’t be the first project for Matsuhisa and Ellison: The two teamed up to build a hotel called Nobu Ryokan located on the picturesque Pacific Coast Highway in Malibu. Matsuhisa has also built other hotels globally.

A Nobu spokesperson reached in their corporate office in New York Friday said she couldn't "confirm anything yet" but the restaurant group is "discussing certain details" about a Palo Alto location.

If true, this would be the first Nobu in Northern California. There are restaurants in Beverly Hills, Malibu, Las Vegas, Aspen, Miami Beach and New York City as well as Tokyo, Hong Kong, London, Milano, Mykonos, the Bahamas (yes, the Bahamas) and elsewhere.

Nobu is known for a fusion style that reflects his own background: He was born and raised in Japan, but went on to open a sushi restaurant in Peru for several years (and then lived in Argentina, Japan and Alaska before moving to Los Angeles, according to an biography on the Nobu website). Nobu opened his first restaurant in the United States (Matsuhisa in Beverly Hills) in January 1987.


The city should say no to this.. this will bring in too much traffic and will affect parking in the exclusive enclaves around d downtown. In addition, this is a chain. We want only locally run mom and pop places in palo alto.

Report Objectionable Content
+   17 people like this
Posted by Downtowner, a resident of Menlo Park: Central Menlo Park,
on Mar 4, 2016 at 3:36 pm


@ Just Say No
&lt;&lt;this is a chain. We want only locally run mom and pop places in palo alto.&gt;&gt;

Seriously?? No Il Fornaio, Cheesecake Factory, Sam's Chowder House, Pizza My Heart, Starbucks, Crepevine?
Does that mean no Walgreens either?

If Palo Alto followed Just say no's guidelines, about half of the downtown businesses would be eliminated.

You can also eliminate most grocers including Whole Foods Market, Trader Joe's, Safeway, Piazza's Fine Foods as well as most of the hotels. Oh, and then Palo Alto should eliminate fast food too (McDonald's, Carl's Jr., etc.) and all gas stations.

Yes, that's the ticket, keep it up with this fabulous strategies to protect Palo Alto. Mountain View would be happy to give a chance for these businesses to succeed.

Another fabulously bright suggestion from yet another genius PA Online commenter.

Report Objectionable Content
+   5 people like this
Posted by charles reilly, a resident of another community,
on Mar 4, 2016 at 6:46 pm

Thank you Elena. This is a great, informative service ...


I have been to two Nobu restaurants in NYC and Aspen and I think that it would be an amazing addition to the downtown restaurant scene.

My comment was a response to Just Say No's, directly above mine. The sideways caret signs indicating the quote from above did not display properly. Maybe the comment from Don't Feed the Troll is correct, sot please do not attribute the first expressed sentiment to me.


@just say: So downtown is "exclusive"? Once again the entitled residents of Palo Alto have spoken.


For those of you attacking just say no. You all rea.ize that the council passed an ordinance banning chain store on CalifornIA street a little while ago. They constantly talk about protecting local retail and keeping out chain stores. Why should Nobu get a break, then???

Report Objectionable Content
+   3 people like this
Posted by Menlo Voter., a resident of Menlo Park: other,
on Mar 6, 2016 at 5:58 pm
Menlo Voter. is a registered user.

Two other locations is a "chain?" Give me a break.

Report Objectionable Content
+   1 person likes this
Posted by Just the facts, a resident of Downtown North,
on Mar 6, 2016 at 7:46 pm


Menlo voter. Maybe you should do a recount t:

If true, this would be the first Nobu in Northern California. There are restaurants in Beverly Hills, Malibu, Las Vegas, Aspen, Miami Beach and New York City as well as Tokyo, Hong Kong, London, Milano, Mykonos, the Bahamas (yes, the Bahamas) and elsewhere."


The downtown area is a nightmare already
Might as wellake it worse with Nobu...the city council does t care

Soon ypu wont be,able to even drive down Univetsity Ave.

Report Objectionable Content
+   9 people like this
Posted by Reader, a resident of another community,
on Mar 6, 2016 at 9:26 pm

The City of Palo Alto's "no chain" ordinance set the threshold rather high, like 8-10+ stores and only pertained to the California Avenue business district.

More importantly, there was a provision that allowed an applicant to ask for a waiver. This would presumably allow the Starbucks and Walgreens of the world to do business in Palo Alto.

It was never meant to be a blanket city-wide policy with no recourse.


Are you kidding. I thought the city wants to do away with all businesses because they are eliminating parking for all employees. Residents only correct? Look at the RPP.


RPP to the rescue....chase all these businesses away. They are bad for us. I've been here 45 yrs and this place is crazy. Businesses go away and leave us alone.


This would be fantastic! I sincerely hope Nobu opens in Palo Alto. It would be a great addition to the dining options.

Report Objectionable Content
+   1 person likes this
Posted by Morty, a resident of Another Palo Alto neighborhood,
on Mar 8, 2016 at 8:16 pm


Nobu would be perfect for PA! And the Malibu fit is surprisingly spot on. PA, Ellison's "Malibu NorCal", but more expensive. Rodeo Drive North is the next step...


Perhaps as in New York there will be a spot for locals, adjacent to Nobu is Nobu Next Door, showing a local address has always allowed us to get a table without a reservation and never more than a 30 minute wait, if worried about parking get out of your car, Uber to and from as New Yorkers do if they don't take the subway!


I am a rich person, so I am so excited! Too bad loosers

This will be great addition to many restaurants we have in our community.

Our sister cities benefit too.

What I will remember about Ruth Bader Ginsburg
By Diana Diamond | 5 comments | 1,981 views