Cartal did not immediately respond to requests for comment. He said in July that he planned to serve, just steps away from Pastis, what he described as “continental and French cuisine … in a casual and friendly small neighborhood restaurant.” 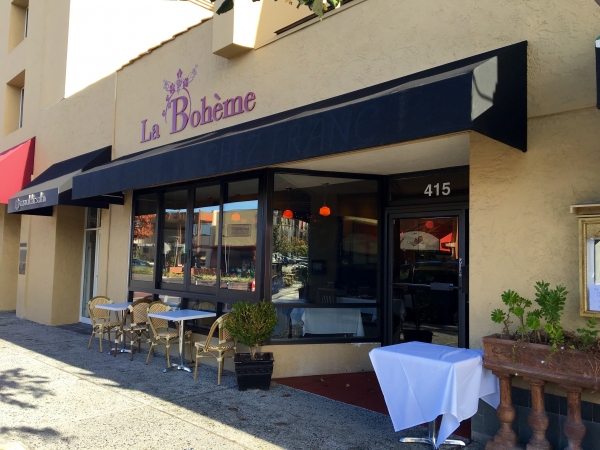 Above: La Bohème, a new French restaurant at 415 California Ave. in Palo Alto.

Two menus — one daytime, or "edition du matin," and one evening, or "edition du soir," — posted in the 415 California Ave. restaurant’s windows this week list dishes first in French, then English. The menus are adorned with simple illustrations (the Eiffel tower, wine grapes on a vine, a fish, a map of France), French quotes and proverbs. At the top of the menu is a quote from King Henry IV: "Bonne cuisine le bon vin, c'est le paradis sur terre." (Translation: "Good food and good wine, these are heaven on earth.")

The dinner menu has similar appetizers, plus salads, entrees (split into meats, fish and vegetarian) and desserts. Entrees range from duck confit with brandy apple sauce and filet mignon topped with seared foie gras to sautéed monkfish, scallops, grilled sole, and a puff pastry with eggplant, tomato and mozzarella.

And, as the restaurant's website reads, "La Bohème is committed to organic, sustainable farming practices and procures only the finest, freshest organic and local products and ingredients."

View the full menu online here. Check out the restaurant's Instagram for some tantalizing food photos.

The interior of what was previously an artisan hot dog restaurant, Chez Franc, has been transformed with new booth and bar seating, dark colors and French posters the walls.

We need an audit of city spending
By Diana Diamond | 7 comments | 1,939 views