Tom Vongampai, who owns Thaiphoon at 543 Emerson St. and a location in San Jose, has laid claim to 320 University Ave., according to the location's alcohol license and an image Vongampai posted on Facebook.

The space was most recently home to Madame Tam Asian Bistro, which closed in June.

The new restaurant will be called Aroy Thai Bistro. Vongampai was not available for comment; a Thaiphoon Palo Alto employee said he's in Thailand for the next two weeks.

Thaiphoon opened in Palo Alto in 2005. 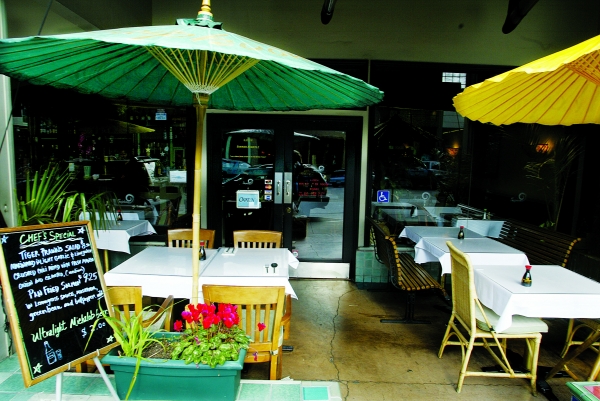 The outside of Thaiphoon on Emerson Street in downtown Palo Alto in 2005. Palo Alto Weekly file photo.

There was later a location in downtown Mountain View, which has since closed.

Thaiphoon also took home "best Thai restaurant" in the Palo Alto Weekly's Best Of 2015 contest for the second in a row.

Check back in the coming weeks for more details on the restaurant concept and opening.

Slow Down is a registered user.


Tom, if you read this, focus more on the food! There are already a whole bunch of mediocre three star Thai restaurants in Palo Alto, including Thaiphoon. Do something that honors the great cuisine of Thailand. Not another dumbed down sugar laden bland facsimile of Thai food.

Report Objectionable Content
+   9 people like this
Posted by Dagwood, a resident of Menlo Park: Allied Arts/Stanford Park,
on Sep 3, 2015 at 3:57 pm


@Slow Down: I'm afraid I have to agree, we need better Thai food in this area, including Menlo Park, which lost a pretty good Thai restaurant years ago on Crane.


Yes, Siam Garden was pretty good, plus the owners were really nice folks. Miss them and their food.

Oh well, I guess that time has passed...


I agree with the above comments. There are too many watered-down Asian-American-fusion restaurants in Mountain View and Palo Alto. Our area has increasingly sophisticated restaurant goers. Restaurants would be wise to cater to them by serving traditional recipes that honor their cuisine instead of bland sweet and greasy Americanized food that only newbies can stomach.

Report Objectionable Content
+   3 people like this
Posted by Mike Keenly, a resident of Menlo Park: Allied Arts/Stanford Park,
on Sep 4, 2015 at 12:26 pm


I'm looking forward to Banana Leaf coming to Menlo Park. The restaurant in Milpitas is always packed during the weekday lunch hour. I appreciate their take on Malaysian and Thai cuisine.


I would be thrilled if the new Thai restaurant was as inspired as Kin Khao in San Francisco. Fingers crossed!


@Mike Keenly - I love Banana Leaf! Didn't realize it was coming to Menlo Park. Thanks for the heads up. Their food (at least the Milpitas location) is light years away in terms of taste from most of the other asian restaurants in the PA/MP area.


I enjoy Old Siam in Sunnyvale. They still put fresh Thai herbs into their dishes, which makes all the difference. It really irks me that so many local Thai restaurants have given up on authenticity.

Report Objectionable Content
+   4 people like this
Posted by Ron Berdich, a resident of Charleston Meadows,
on Sep 5, 2015 at 10:01 am


There used to be a Thai restaurant located next to the old bowling alley on El Camino Real a few blocks north of San Antonio Road. They closed when the bowling alley sold out and the land was converted to a new hotel.

That restaurant was a sleeper. Nobody paid attention to it because (a) it was kinda hard to spot from El Camino being offset from the street, and (b) few people could conceive that a restaurant--any restaurant--attached to a bowling alley could possibly serve good food.

But I ate there on at least half-dozen occasions, and found it to be much better than average every time. At least as good as Thaiphoon.

I wish I could find out if that owner ever opened a new Thai place, as I would visit it in a heartbeat.

Report Objectionable Content
+   6 people like this
Posted by Max Hauser, a resident of another community,
on Sep 5, 2015 at 1:34 pm
Max Hauser is a registered user.


"agree," David Hoffman, and Ron Berdich make good points I resonated with. Yes, Palo Alto's "Bowling-Alley" Thai place was unusual, and a regular stop among my friends (former Thai residents said it was the only local Thai restaurant that even stuck to Thai recipes -- using lime juice when called for inst. of substituting lemon, and so on). In fact, many or most Bay-Area "Thai" restaurants today don't even have Thai cooks or owners, even though it was skilled Thai expats who spearheaded the original local wave of them 35 years ago.

The problem with the argument "Restaurants [should] cater to [increasingly sophisticated palates] by serving traditional recipes that honor their cuisine instead of bland sweet and greasy Americanized food" -- though a noble idea -- is that restaurants must first and foremost survive. The market viewed by restaurateurs who actually undertake the financial risk differs from what casual diners or online commentators suppose. That's why today you see not just bland/sweet/greasy, but glaringly inauthentic compromises like "choice of heat levels" (authentic cooking uses the proper spice level for the DISH and when diners dislike heat, they order something else) or "choice of proteins" for dishes traditionally made with a specific meat or seafood.

I'd be pleasantly, but extremely, surprised to see anything at all like Kin Khao. Kin Khao is as unique and groundbreaking in the Bay Area as The French Laundry was in the 1990s or Chez Panisse in the 1970s. I've known Kin Khao's Thai-born, food-obsessed founder for a long time; for years her answer to "can you recommend any good, authentic Bay-Area Thai restaurants" was "there are none." Finally she undertook to create her own, for that reason. In SF, she can evidently find enough customers who don't constantly order Pad Thai or think it normal to expect a "choice of heat levels."

Report Objectionable Content
+   2 people like this
Posted by Slow Down, a resident of Community Center,
on Sep 6, 2015 at 2:22 pm
Slow Down is a registered user.


@Max Hauser - there is some truth to what you are saying, but "bland sweet and greasy" thai food hasn't been a big success for Thaiphoon - it's often empty when I walk by, and it is clinging to a three star rating on Yelp. Madam Tam's (2.5 stars) did even worse with their poor interpretation of Vietnamese. Kin Khao is amazing, but there are dozens of other great Thai restaurants in SF (Lers Ros), or even neighborhood joints (Marnee) that put the Palo Alto offerings to shame. Palo Alto may not be ready for something like Kin Khao, but hopefully has matured past Thaiphoon.

Report Objectionable Content
+   1 person likes this
Posted by Rebecca and Tom, a resident of Menlo Park: Allied Arts/Stanford Park,
on Sep 8, 2015 at 8:10 am


My husband and I can't say enough wonderful things about this restaurant. Everyone we introduced to it just loved it, in large part because the chef is eager to alter just about any recipe in just about any way.

Want it to be more authentically Thai? Just ask, and that's how you'll get it.

Want it to be gluten-free vegan? No problem.

We urge you all to go back and request a dish the way you'd prefer it. They''ll cheerfully do it.

But please don't criticize them because they've learned the majority of their patrons want dishes prepared a certain way, and they've used this as their standard.


I would like to see some different ethnicity in our downtown food. I was thinking a good Peruvian restaurant would be great. I feel we are saturated with thai and Mediterranean flavors

Report Objectionable Content
+   1 person likes this
Posted by Slow Down, a resident of Community Center,
on Sep 8, 2015 at 12:03 pm
Slow Down is a registered user.


@Rebecca and Tom - Thaiphoon is what it is, it earned it's 3 star average on Yelp.


Most area restaurants have seemed to stop caring about producing authentic Thai recipes. They just use a commercial base and toss in some proteins and veggies. Maybe if we had a larger population of Thai's in the area, they could help keep the restaurants honest?

As an example, Tom Yum (Tom Yum Goong, Tom Yum Gai, etc..) soup MUST have fresh and high quality ingredients in it. (Fresh could be fresh-frozen, if done properly):

Other ingredients:
Whatever protein you want plus complementary veggies (mushrooms, tomato, onion,etc..)

In a classic, good quality Tom Yum soup the bottom of the bowl should be littered with inedible pieces of herbs. The lemongrass, galanga and kaffir lime leaves are usually too tough to chew, but their absence in the bowl is a big clue that fresh ingredients are not being used.

Failure to use fresh ingredients greatly diminishes the complex and contrasting array of aromas and tastes that Thai cooking is famous for. The dish should be a balance of strong contrasting flavors across the dimensions of: hot, sour, sweet, salty, and bitter. (oh, and one other, but shhh..)

Some customers complained about having fish sauce in their soup? No problem, leave it out. Oops, there goes the saltiness. Without salt, the flavors of all ingredients are diminished.

Keep going and you end up with a watery broth that accomplishes nothing but to dilute the flavors of the proteins and veggies.

I get Max's point on local restaurant economics. If a restaurant focuses solely on producing authentic Thai food, but ignores ambiance and the pushing of high margin items (drinks), then they won't survive. On the other hand, if they focus and excel on ambiance and drinks, they could not only survive, but thrive. Amarin is an example. They do extremely well, but over the years, the authenticity of their dishes have gone down (and down). People enjoy their food, which is indeed prepared well, but no longer caters to those who also require authenticity. (And I don't mean authenticity for authenticity's sake. )


I'd also add that the demographics of Palo Alto have been steadily shifting - younger and less white. PA will probably be majority minority by 2020. So you don't need to build your restaurant business around the Hobee's crowd like you used to.


Hey Elana! Drove by Chevy's on El Camino today and saw the signage has all been torn down and the place is closed. When did this happen?? Last Yelp review is from 8/31 so it must have happened very recently.


Would love to try as in I am very particular about food and have tasted many Thai dishes.So hoping for the best that I also get good food here. I used to visit Moon Thai & Japanese(Web Link when I was in Weston. They serve authentic Thai and Japanese food.