Voya, located in the Pear Avenue shopping center across from Century Cinema 16 movie theater on Shoreline Boulevard, soft opened about three weeks ago with a grand opening this Thursday. The restaurant is serving what owner Bella Awdisho describes as "upscale Latin cuisine."

Awdisho, who opened Cucina Venti eight years ago, said a huge amount of the restauarnt's comes from corporate dining and private events, which means often shutting down the entire restaurant and turning away regular individual diners. Given the restaurant's location, far from downtown Mountain View, she said she heavily relies on large tech companies in the area for business.

"While it's great to have those kind of buy-outs, what about the regular people coming in? That just kind of left me feeling not so good," Awdisho said.

So when Quizno's left the near-adjacent space, she seized the opportunity to build a second restaurant. Her team gutted and revamped the space, and she hired back Cucina Venti's original chef, Carlos Maeda, to head the kitchen. Maeda is a native of Mexico, Awdisho said.

The Voya menu is large, spanning from tapas, tacos, ceviche and sliders to Pervuian-style chicken, churrasco Argentino and a whole grilled Branzino fish. The restaurant serves breakfast, lunch and dinner, plus brunch on Sundays. (Check out photos of the menu at the bottom of this story.)

The space is much smaller than Cucina Venti, with several tables on one side of the restaurant and a large marble bar on the other. There are a few outdoor tables in the front of the restaurant as well. Voya is also intended to appeal to local corporations as a smaller private dining venue, Awdisho said.

Voya serves wine (every one is offered by the glass) and beer for now, but Awdisho said she plans to apply for a full liquor license down the line. 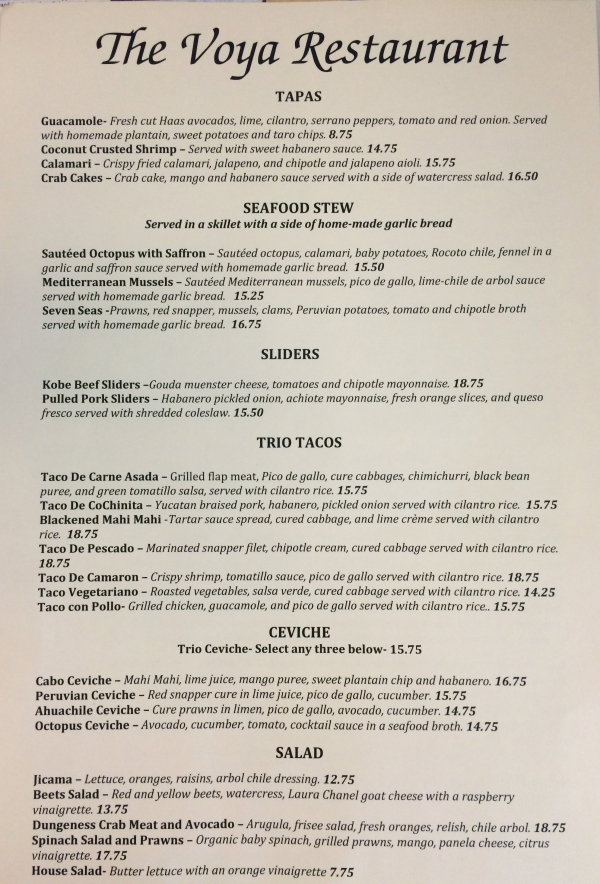 The one thing this area is missing is great empanadas. Just hoping...

Report Objectionable Content
Posted by pogo, a resident of Woodside: other,
on Aug 11, 2015 at 7:52 am
pogo is a registered user.


Voya sounds like a real find! I would never have found or heard of this place without you.