View all posts from Angela Hey

Uploaded: Jan 31, 2015
Billions of things ? watches, sensors, vehicles, wells, equipment and more ? increasingly need their own network connections ? creating the Internet of Things. Consider a shipping container coming to the Port of Oakland on a ship from China. Initially, the container might be connected to a Chinese phone company, and in California it would need to be connected to a US carrier. The container might send messages to a database, indicating its time of arrival. Secure communications may enable it to be unlocked wirelessly from a cellphone. According to research from Berg Insight, active cargo tracking units will grow from 1.3 million units at the end of 2013, to 4.1 million units in 2018, representing a compound annual growth rate of 22.3%.

Early smart watches and fitness trackers connect to phones, tablets and computers via Bluetooth wireless connections or USB wired connections, but increasingly devices will connect directly to phone networks. When I bought my iPhone 6, I waited impatiently as an Apple store expert set it up on AT&T's phone network. A process known as provisioning. Imagine provisioning 100s of devices, connecting them to telephone companies in different countries for corporate travelers, creating passwords and security settings.

Geoff Brown, CEO, founded Machine To Machine Intelligence Corporation (M2Mi) in 2006 to address the problem of connecting the Internet of Things securely. The company is located in historic Building 19 at NASA Ames Research Park. Geoff told me that traditional security uses a blacklist. I remember in the early days of credit cards, a supermarket clerk looking at a blacklist of bad card numbers to validate my card, after I had presented my card for payment.

The blacklist approach to security is a bit like letting someone into my house and then asking them for an ID to see if it is genuine. A better approach is to give a visitor a key, so they don't enter without the right credentials. So M2Mi has patented a Lockbox approach that lets many devices be provisioned securely and globally. M2Mi's software focuses on simplifying device setup for users and analyzes streams of data. It issues alerts, for example, it could warn a trucker when a container has arrived in port, ready for collection. Media company, TMC, and Crossfire Media, awarded M2Mi one of its IoT Excellence awards in January for its M2M Intelligence Platform. The M2Mi Intellgence Platform has modules that address Cybersecurity and Automation. Industry analyst firm Gartner, also awarded M2Mi a 2014 "Cool Vendor" award for Managing Operational Technology in A Digital Business. 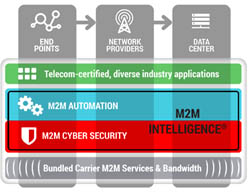 Geoff Brown came from Oracle, building strong industry connections which enabled him to get funding from angel investors. M2Mi has been working on IBM's Cloud to build the M2M Intelligence Platform. It can be purchased as a Software as a Service application from IBM's Cloud Marketplace, as well as from M2Mi. Secure end-to-end solutions, as provided by M2Mi, are increasingly essential as cybercriminals become more cunning.
Most smart watches are connected locally to a smartphone, which is provisioned. In the future, more devices will have direct connections to carriers and software like M2Mi's that make setup easy and secure will see more demand.

Get fact-based reporting on the COVID-19 crisis sent to your inbox daily.
Sign Up
Top Blogs

Couples: Are you Committed to your Vows or Dysfunction?
By Chandrama Anderson | 2 comments | 2,443 views

Do peaceful protests do any good? How about the more violent ones?
By Diana Diamond | 9 comments | 1,540 views