Uploaded: May 13, 2014
Another one bites the dust: Italian restaurant Figo, which has operated at 326 University Ave. in Palo Alto since January 2013, has closed.

Owner Gianni Chiloiro could not be immediately reached for comment. He has been at the 326 University Ave. space for years, operating Pasta Q for 15 years before doing a major renovation and concept revamp to reopen as Figo. 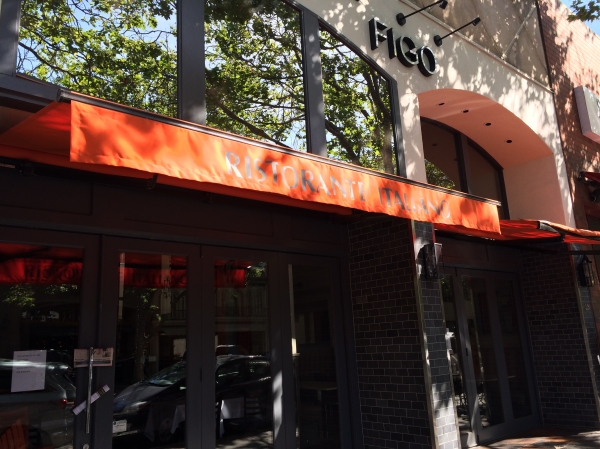 The Daily Post reported last week that Chiloiro initially closed the restaurant after making a deal with the owners of Opa!, a local Greek restaurant group with a location in Los Altos, but Opa! pulled out at the last minute.

Bruce Breitman, a business broker who specializes in the sale and leasing of restaurants in the Bay Area (he moved Lavanda in and out years ago), said he's in the preliminary stages of doing paperwork for a transaction for the University Avenue space.

"There's a lot of interest," he said.


Elena, please note that the local 2-location "Pasta?" chain (which ran simultaneous restaurants in Palo Alto and Mountain View for years until 2013 when both remodeled, to Figo and Doppio Zero, respectively) is spelled "Pasta Q" only in online references, due to software easily confused by "?" as a reserved "special character." The actual restaurants were labeled "Pasta?," as visible in a front signage photo on the web site you linked, and their business cards, etc.

Doppio Zero at 160 Castro (MV) opened for business in February, and seems to be going strong, serving up some authentic and unique True-Neapolitan styled pizzas (per guidelines of L'Associazione Verace Pizza Napoletana, link below), served in the original Neapolitan size -- ideally they should also be ordered UNSLICED per standard Naples practice (slicing pizzas is a US adaptation of the pizza after it came here from Naples, and it doesn't work equally well with all Neapolitan toppings). Reportedly, Doppio Zero will seek recognition from the AVPN soon; if successful, it would become the third such internationally recognized "Affiliato" on the peninsula.


in naples back in the day, they used to sprinkle coarse ground black pepper on the pizza when it was done .you dont see that pepper listed on any of these recipes. in naples, ALL pizza is like terun. it would be like going to round table and getting a terun style pizza.


We enjoyed Pasta? for years and Figo briefly thereafter, but this was bound to happen. Those owners were always a step ahead of their creditors. Food service companies stopped supplying them unless COD. Nice people, but apparently terrible businessmen.


My family and I loved "Pasta?". Figo seemed to me to be an attempt to add frills and flourishes to food similar to "Pasta?" for a lot more money. I miss "Pasta?"!


Thanks, Max. Growing up in the area and dining at Pasta?, I was always confused about how the name should actually be said (Pasta "question mark" or Pasta? as if asking a question).


The name was originally a temporary name as in "Pasta?" what should we name it? They held a contest to name the restaurant, and they stuck with Pasta ?

We will miss it, dined there it's first and last week in business.


Pasta? was a great restaurant, loved the food. It's a shame that it closed and was replaced with something that couldn't make it. I liked the pizza at Figo, but then they got rid of the pizza and made it a regular Italian restaurant. Bring back Pasta?

Premarital and Couples: What Does Sex Mean to You?
By Chandrama Anderson | 1 comment | 1,145 views