Uploaded: Apr 17, 2014
Palo Alto now has a grand total of two eateries where diners can pay with notorious e-currency bitcoins, with Curry Up Now jumping on the bandwagon last week (joining Coupa Cafe, which has been accepting bitcoins since last year).

"Hello awesome people. We now accept #bitcoin at our Palo Alto location," Curry Up Now tweeted on April 11. "Coming to other locations very soon. Everything is awesome." 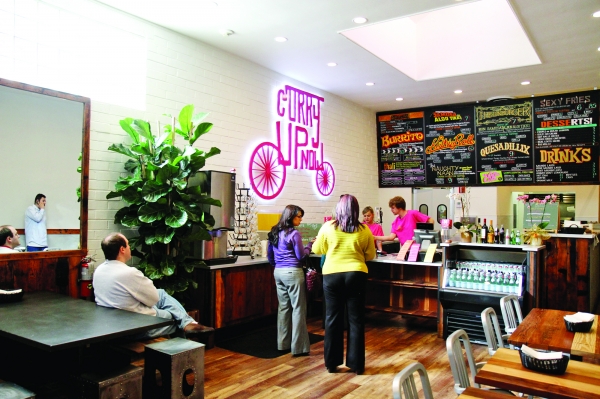 Darrel Oribello, general manager of the casual Indian street food restaurant at 321 Hamilton Ave., said they were encouraged by a Curry Up Now fan who wanted nothing more than to be able to pay for the eatery's Indian-style burritos with bitcoins.

"It's fast, cheap, private and (we) believe it to be part of our paying future," Oribello added.

Curry Up Now is currently using BitPay, a payment platform for the e-currency, to accept payments, but Oribello said he expects the restaurant's point of sale (POS) software to have an integrated bitcoin payment system "shortly."

Curry Up Now was born as a food truck and morphed into three brick-and-mortar locations (Palo Alto, San Mateo and San Francisco). The trucks still operate, too, and Oribello said all outposts -- mobile or otherwise -- will soon accept bitcoins.

"Palo Alto is the heart of the Silicon Valley, why not start here first?" he said.


I want to pay with paper clips.. Please service my need I am part of the me-me generation and believe it will be the next disruptive payment system. Oh and I am a techie (kinda provides that elitist touch don't you think).

I look forward to the days we glorify tradespeople. You know, people who actually build useful things.


Bunyipd: Is that deliberate irony, or don't you realize that the very technology you used to write that comment was built by those you clumsily mock?


Desmond: Is that deliberate irony, or don't you realize that the very technology you used to write that comment, the QWERTY keyboard, was designed in 1870???

'Ignoring what's wrong has never made anything right'
By Diana Diamond | 4 comments | 1,462 views

Premarital and Couples: What Does Sex Mean to You?
By Chandrama Anderson | 1 comment | 1,057 views