At Five Guys, customers can build their own burgers from a long list of toppings, from the usual suspects to jalapeño peppers, A.1. Steaksauce and grilled mushrooms. (According to the restaurant's website, there are more than 250,000 possible ways to order a burger at Five Guys.) A standard burger goes for $5.89; cheeseburger, $6.59; bacon burger, $6,89 and bacon cheeseburger, $7.59.

For some reason, Five Guys also likes to have complimentary roasted in-shell peanuts on hand at all their restaurants, so grab a handful while you're waiting for your burger.

The Mountain View outpost joins more than 1,000 Five Guys across the country, and a handful in the Bay Area (Sunnyvale, Redwood City, Belmont, San Jose, Burlingame). The now-enormous Five Guys empire first started as a family-run burger joint, opened by the Murrell family in 1986 in Arlington, Virginia. (Five Murrell brothers are the restaurant's namesake.) After a few years and a lot of success, the Murrells expanded to the Washington, DC area; then Virginia and Maryland and eventually, throughout the U.S. from Alabama to the Golden State. 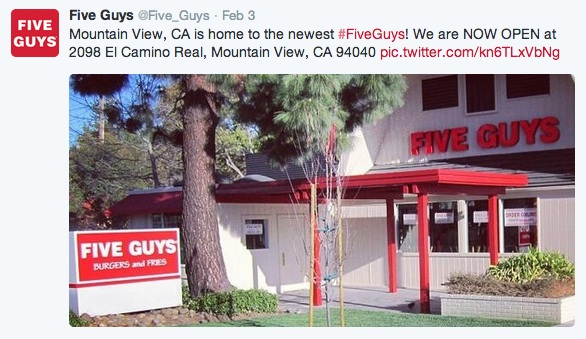 
I would eat here, but I don't care for their gender politics.


It will always be the Red Barn to me.
I do wish Five Guys fries were more like The Counter.


I thought Mountain View was against fast food restaurants and drive thrus on El Camino. At least that is what they said when Sizzlers was to be replaced by one.

Where was the protest about traffic and parking and engines idling?


Yes, obviously a double standard. I mean its inconceivable that when you say "I thought Mountain View was against fast food restaurants and drive thrus on El Camino." that it could be that you though wrong.. Impossible that your initial premise was incorrect, right?
Also, what side of the building is the drive through on for this restaurant?

I think these days I pick a place based on their sides. You can get great burgers at more than a few places, but great fries and to a larger extent, great onion rings are tougher to locate.

One day some place will open that will do it all...and I'll die of a cardiac 2 years later with a smile on my face :)


It's not a drive thru, people. Get your facts straight before complaining.

LOL, if people did that, these forums would be a ghost town.

Premarital and Couples: What Does Sex Mean to You?
By Chandrama Anderson | 0 comments | 2,522 views

What I will remember about Ruth Bader Ginsburg
By Diana Diamond | 5 comments | 1,785 views