View all posts from Janet Lafleur

Uploaded: Nov 26, 2013
When most people think of traveling by bike they think of bicycle touring, where you carry everything you need to be self-sufficient for long distances: clothing, sleeping bag, tent, cookware. Like backpacking on wheels. Or perhaps "credit card" touring, where you skip the camping and stay in motels or hostels. Or supported tours, where guides plan your route and vehicles carry your gear (and you too, if you don't want to ride that day).

When my husband Dick and I bought our touring bikes last year, we didn't really have a plan. I suspected we'd set out for credit card type tours, and we still may. But so far, our overnight bike trips don't fit any of these models. I would call them "bicycle getaways," 2-4 day trips, more urban than most touring trips, using transit to increase our travel ranges, and with luxury accommodations. Ideally a hotel with a fuzzy robes and great restaurants nearby. 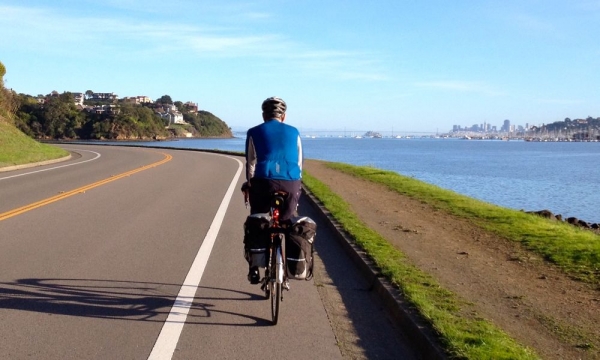 So far, we've done four bicycle getaways: San Francisco, Sacramento, Folsom and one I planned last year for Dick's birthday. Instead of giving birthday gifts, we have a tradition of surprising each other with short trips. Dick's birthday always falls near Thanksgiving, which makes planning more challenging for me. Airports and highways are full of holiday travelers, and after ten years together we'd already visited all the closer spots. I was running out of ideas.

Then I thought of Tiburon, a small town on the north end of San Francisco Bay that along with neighboring Sausalito and Belvedere Island make up what's affectionately called the San Francisco Riviera. I was sold.

Like our other bike getaways, the train made it easy to ride from home. The late-morning Caltrain bullet got us to San Francisco, where rolled slowly up the waterfront under clear blue skies. Since Thanksgiving is the traditional start of Dungeness Crab season, we stopped for lunch on Fisherman's Wharf. Messy but tasty, I was grateful for the seafood bib they provided.

After lunch we changed into bike wear for the 30 mile ride across the Golden Gate Bridge and around the bay to Tiburon. Having ridden across the Golden Gate in the fog and wind of summer, I must say the late fall crossing was a delight. We hugged the bayside then rolled down Tiburon's historic Ark Row, named for former houseboats converted to stores when the lagoon was filled, and arrived with plenty of time to rest and clean up for Thanksgiving dinner on the bay. 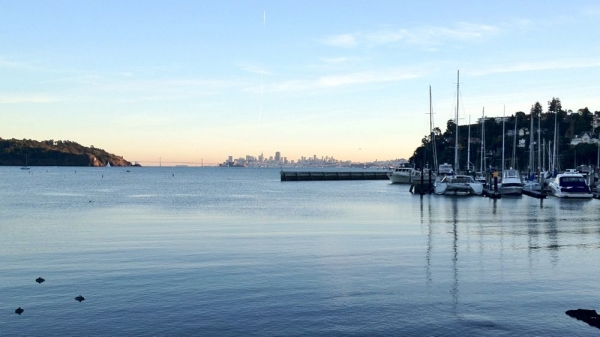 The next day we rode to San Rafael along the scenic Paradise Drive and through the new Cal Park Hill Tunnel, then finished the ride with a 360 degree tour of hilly Belvedere Island. From Belvedere, the complete view of the "San Francisco Riviera" could be seen in all its glory, from Sausalito to Tiburon. Getting home the next day was just a ferry ride, a short spin down the Embarcadero, and train ride away.

Starting from home in Mountain View, we traveled this route for a total 165 miles: 80 miles by train, 75 by bike, 10 by ferry, for less than we'd spend on a tank of gas. No holiday traffic like a driving trip would be, and more luxury than a traditional bike touring trip. Why didn't I think of this sooner?

Where have you ever done loaded toured with your bike? Did you go hardcore with fully-loaded touring or did you "credit card" it for a lighter load?

Check out the photo gallery for our trip.

Is that really 75 miles of biking? We often do something similar as a day ride. Take Caltrain up to the city, then bike across the bridge, up through Marin Headlands, up to Tiburon and around the Paradise Loop. We catch the ferry back from Larkspur instead of back tracking to Tiburon, so the total distance is somewhat less.


Dick tracks all his mileage (even on our bike dates) so I'm sure it's right. The difference is mostly that we went past Larkspur to San Rafael and back to Tiburon. Plus we pretty much rode every street on Belvedere Iskand. Then there was getting lost on a bike path in Corta Madera trying to find our way to Larkspur. And we also rode the SF waterfront south of Caltrain. We meander a lot.


Nice! Usually I am a credit card traveler, but this route definitely looks doable. I might try to replicate this:-)


Great trip, great idea for a birthday tradition. I'd recommend taking the Vallejo Ferry too - I biked up to St Helena from there - the bike lane through American Canyon was filthy with bungee cords and debris, but given the tourist traffic was almost stopped it was easy to pass by, watching for exits from Walmart and other stores. When you get to the hospital in Napa turn up to the Skyline Wilderness Park for a rest then take backroads up through the wine country. Can come back via Petaluma and Larkspur - over the hills.

You could also do Mare Island with historical museums or Rosie the Riveter/WWII Home Front National Historical Park in Richmond from Vallejo. The ferry ride is a great way to see the Bay.

Mountain View's Castro Street opens up for an eat-and-greet to rally support for businesses
By The Peninsula Foodist | 0 comments | 2,825 views