Steak Out in Mountain View becomes Bierhaus in name and spirit

Uploaded: Nov 21, 2013
Steak Out owner Mike Finley said that when he settled on a name for his Mountain View restaurant years ago, he wasn't completely happy with it.

"When I first started with Steak Out, I had about two months to come up with a name and it just wasn't ... I just didn't know what I wanted to be," Finley said.

He knew he wanted burgers to be involved ("I have a profound respect for the burger") but the rest was a bit messy, as it goes in the restaurant business.

Two and half years later, and he finally knows what he wants: a new name, Bierhaus, and a new overall approach at the Castro Street restaurant and beer garden.

Though the new name might imply a reinvention on the beer side of things, that hasn't been touched.

"We've been a beer garden for about two years anyway," Finley said. "And I'm happy with that part, but really defining more so what the food is like and what the customer service experience is is a little more difficult."

Enter a menu that's about 90 percent new, with "shareables" (bread and spread, handmade pretzel with horseradish butter, currywurst and fries, cheese fritters, sweet potato-garlic fries), salads, sandwiches and melts now added to the lineup. Much is done locally, seasonally and in "haus" when possible.

"Our future is going to be casual California-German food," Finley explained. Call it California biergarten fare (as the restaurant's new website does).

Though the Marin Sun Farms 100 percent grass-fed burgers that SteakOut was known for are still the "anchors" of the menu, they're no longer the sole focus.

The item at the very top of the Bierhaus menu, also new, is brettljause, which means something along the lines of snacks on a wooden platter. Think massive spread of meats, cheeses, bread, picked vegetables and the like on a large wooden platter.

Finley was served the traditional Bavarian plate in a visit to Austria this September.

"It was one of the best meals I've had in a really long time," he said.

But Bierhaus is still a beer garden (with 250 seats outside), so there's still 18 beers on tap, including gluten-free options, and 99 bottles of beer on hand (or the wall). The beer selection is overseen by Scott Snyder, "beer meister and partner." According to a press release, Snyder will be brewing his own house beer in "the near future" and has plans to host tap takeovers and other beer-related events at Bierhaus.

The new name also accompanies a new mission for Bierhaus, Finley said. Referencing a beer festival held many years ago in Mountain View that's no longer in existence, he said "the soul of this beer fest still lingers within Mountain View. My intent is to revive that."
(The festival he was thinking of could be any of the Small Brewers Festivals held in Mountain View over the years. The festival was started in 1988 and hosted by Tied House, according to this Mountain View Voice article from 2000.)

Finley said he has his eyes on June 2014 for a large beer festival that would span Castro Street with microbreweries, home brewers, food and more.

"Mountain View should be the beer mecca for the Bay Area," Finley said. "There's no reason for it not to be."

With Tied House, Steins, Jane's Beer Store and now the "old-new" Bierhaus, he might be on to something. 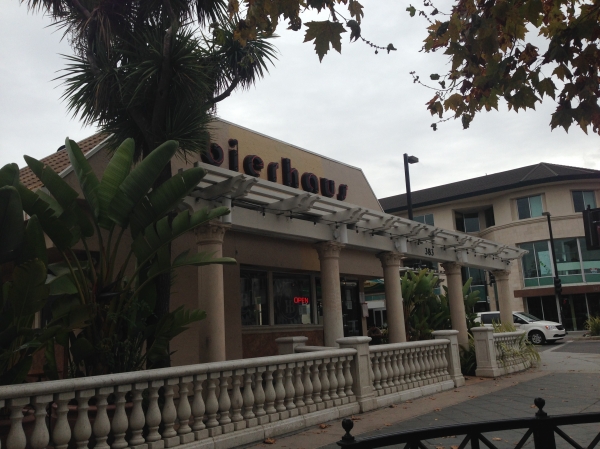 Open 11 a.m. to 9 p.m. daily or until closing on Thursday, Friday and Saturday.

We now have an alternative to Steins (which I occasionally visit)!

I'm glad to see some focus from this place. I've been to SteakOut a couple times before, never could reconcile the burger stand + beer garden mishmash which was so haphazardly slapped together.

I look forward to visiting this place in the warmer months; with their large outdoor seating area, they definitely have an advantage in that regard versus Steins.

I enjoyed the old Small Brewers Festival that took place in the parking lot behind Tied House, but truthfully, the event had run its course by the end of its days. It would be great to see some sort of collaborative revival next year, something more family friendly. The defunct Festival had devolved into a drunken beer fest in its last couple of years.


My first thought upon reading this was that Finley changed the name to better compete with Stein's in the restaurant/biergarten category, but it's also encouraging to learn of the new menu options. I visited Steak Out a couple of times when they were still relatively new, but there wasn't much to draw me back repeatedly. I'll definitely try out the new fare along with a good beer.

I also agree with Jay's comments about how the Small Brewers Festival devolved into a not-so-fun event. The parking lot behind the Tied House was not the best venue and something along Castro Street, akin to A La Carte and Art, would be worth a try if the approvals can be secured.

Report Objectionable Content
+  Like this comment
Posted by Max Hauser, a resident of Old Mountain View,
on Nov 22, 2013 at 2:16 pm
Max Hauser is a registered user.


To NW Resident's comment comparing the name change to Steins: Although not all of the name-change publicity has made this clear, SteakOut's owners long ago decided to change the name, they'd searched for alternatives throughout 2012, even polling customers at one point. They told me about a year ago that they'd settled on Bierhaus -- long before Steins opened this Spring. The formal change had to wait for remodeling, and that in turn for City approvals.

And the menu has indeed added more German things while keeping the grass-fed burger variations that were SteakOut's original focus. Check out this unusual casual restaurant's new offerings, if you haven't already.